Mr. L, also known as The Green Thunder, is the evil alter-ego of Luigi that appears in Super Paper Mario, serving as one of the minions of Count Bleck. He is first seen as Luigi in Castle Bleck; after trying to escape, he gets captured and brainwashed by Nastasia, ultimately turning him into Mr. L. From then on, he is encountered multiple times throughout the game, doing Count Bleck's bidding and trying to stop the heroes from collecting the Pure Hearts and foiling his plans for total destruction across all dimensions.

Mr. L's design is quite different from Luigi's. While he still has Luigi's trademark green cap, it has a black patch instead of a white one, and the "L" is reversed. He also wears black overalls with a black shirt, and a green neckerchief around his neck, and has noticeably darker gloves and shoes than Luigi. Over his eyes, he wears a black mask. He is much more brash and daring, as well as self-absorbent to the point of trash talking the heroes, starkly contrasting the normally nice and timid Luigi.

During the events of Super Paper Mario, it is implied several times that Luigi is the "Man in Green" spoken of in the Dark Prognosticus and the Light Prognosticus, both stating that he and his affiliates will determine which prophecy is true.

Luigi is seen among the audience of Bowser and Peach's wedding, hosted by Count Bleck. Luigi tries to stop it, but he only provokes the Chaos Heart, causing him to fall unconscious and secure the Chaos Heart in the count's hands. Following this, he wakes up in Castle Bleck, where he meets a pair of Goombas that trick him into helping them escape. While trying to find Peach and escaping the castle, Luigi finds himself at a dead end, and cornered by Nastasia. Using her hypnosis powers, she overpowers Luigi, forces him over to Count Bleck's side, and turns him into Mr. L.

Mr. L is first physically seen in the Whoa Zone, aiming to defeat Mario, Peach, and Bowser and secure the Pure Heart. After trash-talking the three heroes, he battles them. During this battle, Mr. L is able to heal himself with Shroom Shakes, though this can be stopped if the player attacks him while doing so. He will jump and try to land on the heroes to damage them, and can also charge up for a Super Jump that damages the heroes if they jump into him. After being defeated, he summons his mechanical "brother", Brobot, to battle them. With the help of Squirps, they manage to destroy Brobot and defeat Mr. L again, forcing him to retreat.

Following his defeat, Mr. L appears in Castle Bleck, where he is introduced to Count Bleck's other minions. He is shown to be boastful even to them, referring to them as "junior minions". O'Chunks and Mimi react negatively to this, with the later noting that Mr. L also lost to the heroes. He says he was merely scouting, and goes to the castle's repair bay to fix Brobot for his next battle. Later, he is seen longing to battle Mario and friends with his newly-repaired Brobot, but Nastasia tells him that they were given strict orders from Count Bleck to stay put. After Dimentio persuades them, Mr. L and Mimi go anyway, thinking Count Bleck would be happy if they ended the heroes' games.

After the Sammer's Kingdom is destroyed by the Void, Mario, Peach, and Bowser find a broken Pure Heart in the remains. Before they can get it, Mr. L jumps in to steal it for himself. He decides to battle the heroes again, this time with Brobot, now rebuilt into Brobot L-Type. After being beaten once more, he flees, letting the heroes obtain the Pure Heart.

Shortly after, he is seen pondering his inability to defeat the heroes to himself. Then, Dimentio appears, and aims to destroy him saying that after a second defeat against Mario and friends that he wouldn't be able to show his face to Count Bleck. After doing so, Mr. L is sent to the Underwhere. In actuality, Dimentio truly planned on freeing Luigi from his hypnotism to reunite with Mario, then have both of them join him to destroy Count Bleck so he could use the Chaos Heart.

After being found in the Underwhere as Luigi, he joins Mario, and goes through the Underwhere and Overthere to find Bowser and Peach, as well as claim the last Pure Heart. This opens the path to Castle Bleck, and the heroes venture forth to stop Count Bleck and save all worlds from being destroyed. They all fight and defeat Count Bleck, but just before they can celebrate, Dimentio appears and plants a Floro Sprout on Luigi's head, once again brainwashing him into becoming Mr. L, this time following Dimentio. As the "Man in Green" is said to be the ideal vessel for the Chaos Heart, Dimentio merges the two with himself to create Super Dimentio. Mario, Peach, and Bowser manage to defeat Super Dimentio, freeing Luigi from his influence and destroying Dimentio once and for all.

“That is my DEAR metal brother. He and I share a spiritual bond, you know.”
— Mr. L, in Super Paper Mario

Brobot is a giant robot in Super Paper Mario, built and operated by Mr. L. It resembles a giant, metallic Luigi head, with the cockpit being inside the cap. It is battled in the Whoa Zone, and an upgraded version, called Brobot L-Type, is battled in the destroyed Sammer's Kingdom.

After Mr. L is initially defeated in the Whoa Zone, he summons Brobot and faces the heroes and Squirps in a battle resembling that of a shooter. Brobot will mainly fire projectiles, such as homing missiles and lasers from its eyes. It also has the ability to open its mouth and inhale, trying to suck the heroes in before spitting them out, dealing heavy damage. In order to damage it, the heroes must use Squirps and fire shots at it. Throughout the battle, several Choco-bars will float by, and, like typical power-ups in shooters, will power up Squirps and make him stronger, such as boosting his attack power, increasing mobility, and creating a barrier around the player to nullify damage. After taking enough damage, Brobot will be destroyed, forcing Mr. L to retreat.

Following Brobot's destruction, Mr. L repaired it into its new model, Brobot L-Type. It resembles Brobot's previous design, but now has added hands and feet. After the Sammer's Kingdom is destroyed, the heroes find a broken Pure Heart before Mr. L appears and snatches it. He then summons Brobot L-Type, and uses it to battle the heroes. Unlike Brobot, Brobot L-Type's battle is much more traditional as it is battled on the ground. It retains its lasers, missiles, and inhaling attacks, though with the new limbs, it can also try to stomp on the heroes, fire the hands like missiles, and fling its mustache forward like a boomerang. It has 64 HP and high Defense against normal attacks and 8 Defense against Bowser's fire breath, making it difficult to damage. As such, it is recommended that Thoreau be used to pick up the projectiles it fires and throw them back at Brobot L-Type. After being destroyed, Mr. L flees again, accidentally leaving behind the Pure Heart.

Mr. L is a playable character in Star Hedgehog: Adventurous Team. He is the highest jumper and can use the Charge Jump from Super Mario Bros 2. He can also use the different powerups:

Mr. L, also known as The Green Thunder, is a brainwashed version of Luigi enlisted by the EVIL league.

Mr. L reappears in Boss Battles as well, a boss. He generally plays rather defensively, running and jumping more than attacking during his first phase. When he attacks with thunder balls, he can be easily punished because he just stops. During the second phase of the fight, he uses Brobot to float around the arena and shoot missiles across the arena. These missiles must be either redirected towards him or during the third phase, avoided. Brobot also has a sucking attack that can be easily punished as well.

Mr. L appears in New Super Mario Bros. The Roman Worlds as the boss in the World III Castle. He attacks by throwing green fireballs, running at high speeds and ground pounding. Mario must defeat him by blowing him up with Bob-Ombs.

Mr. L appears in Super Smash Bros. Charged as an alternate costume for Luigi. While the announcer refers to him as "Mr. L", he shares his voice clips and crowd cheer with Luigi.

In Mario Super Sluggers HD, Luigi has a palette swap that resembles to Mr. L.

In Super Smash Bros. for the arcade, Luigi has a palette swap that resembles to Mr. L. 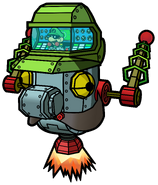 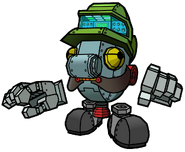 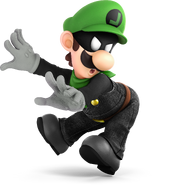 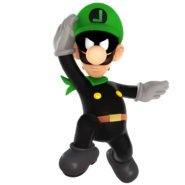 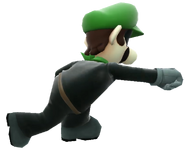 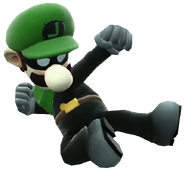 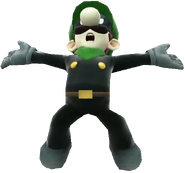