A Mr. I is an eyeball creature in the Super Mario series, debuting in Super Mario 64, and usually appearing in horror-themed levels, especially the Ghost Houses. Mr. Is are immobile and will constantly look at Mario or other targets, paying no attention to anyone else but the target. If needed, they rotate around so they can still watch their target. They attack their targets by shooting white or blue bubble-like laser beams.

The Mr. Is are invincible to jumps and punches, but they have a weak point. Mario or another character need to run in a circle around it, no matter which side, and repeat it a few times. The Mr. I will become dizzy, shrink and will turn into a Blue Coin or something else as worthy.

The basic appearance of a Mr. I is quite simple. It appears to be a huge eyeball with white sclera and blue iris. The pupil is either a big circle or a tall, thin oval.

Mr. Is make an appearance as playable characters in Super Mario Spikers, appearing as Defensive-type Sidekicks. In the game, they are equipped with a small visor attached to the back of them, which lets the Mr. I enhance its blasts of energy, as well as quickly analyze where a ball will land and the optimal place to spike the ball. Their eyes will change color depending on their team, and their theme is a Country remix of the boss theme from Super Mario 64. 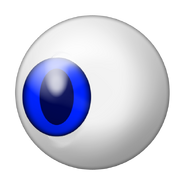 A Mr. I in Super Mario Spikers
Add a photo to this gallery

Retrieved from "https://fantendo.fandom.com/wiki/Mr._I?oldid=2625234"
Community content is available under CC-BY-SA unless otherwise noted.