Moyan is a protagonist in the Fantendo Fury series.

7000 years ago, Moyan created Eate, along with Winson and Mahogany. He created the mountains, rocks, land formations, clouds, and electric charges in the planet. He is also the master of the Thunder and Earth elemental stones.

After a long, agonizing journey, Moyan found Temporak and faced off in a battle. After many strikes, Temporak was still standing. Moyan prayed for help, and suddenly, out of nowhere, a blue light struck him, and then a red one. He started floating, and transformed into a yellow being. He saw the images of Winson and Mahogany in his eyes, and realized they lended him power. He fought with Temporak once again, and supposedly killed him. He was rewarded with immortality, but refused, and said he had come to miss civilization, and was glad he was back, and that he would visit the World of Immortals every once in a while, and left. 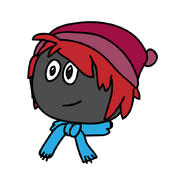 Christmas art by Arend (t∣b∣c).
Add a photo to this gallery
Retrieved from "https://fantendo.fandom.com/wiki/Moyan?oldid=3096326"
Community content is available under CC-BY-SA unless otherwise noted.