Motley Bossblob is a boss that made his debut in the 2013 platforming game Super Mario 3D World. He was a boss encountered after saving the cyan Sprixie Princess in World 6. Then he re-appeared as a boss in World Bowser, in a gold costume. Finally, he took place as a final boss in World Flower´s last level in a red costume.

Motley Bossblob is evidently based off of a jester hence his clown-like attire. He has two fangs and a Koopa-like face, with two fangs and a slightly up-turned nose. He is humanoid in shape albeit very short. He carries a wand with him that he uses to control the Gelatinous Blobs, he also has two Ring Bracelets on his hand and a large golden circle on his attire.

He has a giant form that is comprised of himself and his gelatinous blobs, its colour varies according to the battle. It is a large gelatinous monster that appears similar to Motley's true form although is more akin to an overweight clown, it retains the two pom-pom jester's hat of his true form and the bracelets around his wrists. Its body appears to form a checkered pattern from his neck downwards and appears to have shoes unlike Motley's bare feet.

Both Forms have diamond shaped pupils, with the Gelatinous Clown form's eyes glowing when it enters battle and Motley's being identical to the two colours of his jester's hat.

Motley Bossblob is a final boss in the board Circus Wastelands.

Motley Bossblob reappears as a recurring boss in the Water Star courses of the game. He appears in his normal silver form and when he shows up in a later course, he has a new "Malachite Magic" form with new abilities. He reappears one last time in another course as "Opal Overlord" with new abilities as well.

In Mario Tennis Deuce Motley Bossblob Appears As A Boss. 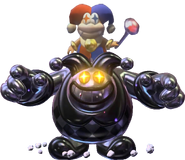 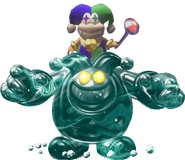 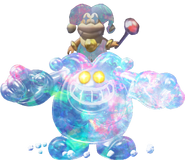