Fantendo - Game Ideas & More
Register
Don't have an account?
Sign In
Advertisement
in: Articles under Construction, Characters, Stubs,
and 19 more

“I don't want to be just another memory, a shadow... I'm scared Lavora, I'm scared of being alone again, please, don't let me be alone again...”
— Morisha Koopa, to Lavora in Kooped Up

Mortisha Koopa is Bowser's niece, she lives with Bowser and the Koopalings because Bowser's sister Becki Koopa had died. Mortisha is respected and treated like a Koopaling by most of her cousins.

Mortisha has brown hair styled into a bob, a red head, shell and red shoes, her eyes are blue and she wears lots of blue eye shadow. Her shell is rose red and dotted with spikes, her shell has a white encasing and a white rings around the spikes. Her shoes are red and look just like Wendy's. She has horns but she sometimes hides them under her hair.

Mortisha is very vain and slightly stubborn at times, she loves music and make-up. To her, fashion is everything so she tends to try and buy the latest things. She hates getting her hair wet and has a tantrum if it does but behind her brattish personality is a sweet kind and caring little Koopa who is afraid to be who she really is because she thinks her uncle will abandon her and she'll be alone forever, few of her cousins know her secret.

Mortisha found Jinkesse's Chamber whilst looking for the bathroom in Bowser's Castle, she has been scared of Jinkesse ever since.

Lavora is Mortisha's best friend, Mortisha sometimes gets fashion tips from her, the only thing that really bothers Mortisha about her is the fact they use different brands of hair spray, the two are also in a band together along with Dolly, Elly and Ludwig.

The two seem to be rivals, Pyotr likes to steal her stuff, mainly her necklace but Bowser always gets it back.

Mortisha and Ludwig don't seem to like each other that much but they have to get along sometimes because they're in a band together.

Mortisha enjoys Lemmy's company and treats him like a baby giving him hugs and kisses every time she sees him making him slightly scared of her.

Mortisha hates Roy because of how mean he is to Elly and Dolly, she sometimes slaps him if he says mean things to her cousins.

Mortisha isn't fond of Noah and thinks he's weird but because he's from another universe where the events of Super Mario Bros 3 never happened her meaning mother is still alive in that universe and she pesters him to tell him about her.

Mortisha likes to play with Ross's hair and usually braids it and ties it back with bows as he sleeps.

Mortisha thinks Iggy is weird and usually stays away from him.

Mortisha likes to bake cakes with Dolly in secret at night, she asks Dolly not to tell Bowser so he doesn't think she's soft.

Mortisha is afraid of Alex because he has electric powers, she is scared of electricity because her mother died in an electrical accident.

Mortisha feels sorry for Risen and is afraid that Bowser will treat her like him if he finds out she's not as evil as he thinks.

Mortisha likes Bazyli but Bazyli doesn't like her, but she doesn't know this.

Mortisha thinks Morton is to fat to be part of the Koopa Troop and tries to get him to leave.

Mortisha doesn't like Lady's Style but enjoys talking to her.

Mortisha thinks Jackson is a douche and tries to act cool, she mocks him by impersonating his "Swaggy Walk" as she says the words "Sup dooooood, yo dawg" and laughs at him.

Mortisha likes Larry but he likes to play pranks on her.

Mortisha likes Chris but hates the fact he doesn't clean his teeth, whenever he talks to her she sprays his open mouth with breath freshener.

Mortisha often asks Tim about her necklace as it is a type of gemstone, they both keep trying to find out how it lets her read minds.

Mortisha loves playing games with Dragonia, she asks her to use magic to make her hairspray last longer.

Princess Daisy and the Legend of the Sarasaland Scepters

Mortisha is the boss for World 25 and controls the Scepter of Music. Her boss battle takes place in a bedroom chamber, Mortisha is laying down on a bed with rose petals in the typical "Funeral Pose" holding a bouquet of roses and covered over with a satin sheet. Mortish slowly raises and must be either; Blasted with the power of the Cosmos 10 times, stomped 5 times or use a glitch where she falls of the edge of the map (aka, out a window). Once Mortisha is defeated she loses her Scepter and jumps of the map (out a window). She is later battled again along with the rest of the Koopalings before Daisy battles Tatanga.

Mortisha is one of the main antagonists of this game. She has a magic paintbrush and is battled three times in the game.

This article is a stub. You can help Fantendo by expanding it.

A young Mortisha is set to appear in a new Mario comic series along with a young Lavora and a living Becki Koopa. Mortisha and Lavora are to be separated from Bowser, Clawdia and Becki and are a key part of the story. It also reveals how Becki died and why Mario and Bowser have a large rivalry. It also explains what happens to Pauline after Mario and Luigi enter The Mushroom Kingdom

Names In other Languages 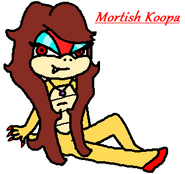 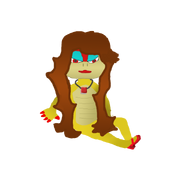 Mortisha as she appears on the unfinished Koopa Family Tree. 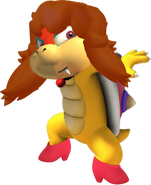 Mortisha by Nutta of da Buttas 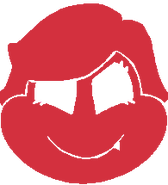