Moon Coins are items from the Super Mario series, first appearing in Super Mario Finale. Their main purpose is summoning Power Moons through being collected by Mario. They resemble Star Coins in that they are coins that have a celestial object embedded onto them. Although Power Moons appear in many colours, Moon Coins have only appeared so far in green, due to the only game they appear in only having green Power Moons.

Moon Coins first appeared in Super Mario Finale. Most Power Moons in the game only appear after an objective has been cleared, and many of these objectives require collecting all of the Moon Coins around an area. In some cases, these Moon Coins only appear for a small amount of time after a P-Switch has been pressed, requiring quick timing in order to collect them all. 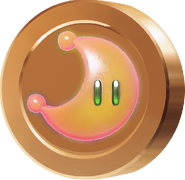 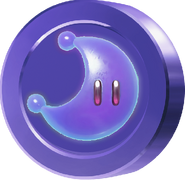 Retrieved from "https://fantendo.fandom.com/wiki/Moon_Coins?oldid=3132581"
Community content is available under CC-BY-SA unless otherwise noted.