Monty Moles are uncommon enemies in the Mario series. They are mole-like enemies that hide in walls or in the ground, until Mario or Luigi comes near, after which they will pop out and chase them. They can be defeated by stomping on them. Their supposed leader is the King Monty Mole that appeared in a screenshot from the Paper Mario: Sticker Star beta and was also briefly mentioned in volume 5 of Super Mario-kun (though they been seen working for Bowser on multiple occasions).

A Monty Mole appears as a character in Super Mario MHL.

Monty Mole appears as a medium driver in Koopa Kart. ﻿

Monty Moles appear in Super Mario World 3D as common enemies in some courses, such as Underground Caverns and Sandy Undergrounds. They attack digging up and jumping from the ground, they then walk following the player. Mega Moles reappear in this game from Super Mario World.

Mega Moles attack by digging up and throwing rocks at the players similar to what Monty Moles did in Super Mario 64. However, some Mega Moles pop out like Monty Moles, but they require two jumps to beat them. King Mole also makes his first appearance,and looks like the crowned Monty Mole from Paper Mario: Sticker Star.

Monty Moles reappear in Mario & Luigi: Sage Quest as enemies, first encountered at Mount Grumbledome, where they are fought alongside either Tanoombas, Bullies, Stone Spikes and Rexes. Monty Moles will dig out and throw boulders at the Mario Bros. so they must jump over it, or dig out huge boulders that they will high into the air for them hammer it to counterattack, winking before doing so (which telegraphs which bro they will throw the boulder at; right for Mario, left for Luigi). When they get dirt on their eyes, they will throw the normal-sized boulder really high, which will hurt the bros if they jump, and they will throw the huge boulder straight at a bro.

Monty Mole appears as a playable character in Mario Tennis: Heroes Vs Villains marking the first time he is playable in a Mario Tennis game. Monty Mole is a Speedy character type being very fast but with weak shots. His zone shots are Burrow Dash (Digs into the ground leaving a dirt trail then pops up either farther up the court or down the court) and Mini Monty Tank (hops in a smaller version of the Monty Tank and zooms to the left or right side of the court). Monty Mole’s Special Shot is Monty Tank Launch in which he hops in his Monty Tank and puts himself in the cannon he aims the cannon up launching him up so he can hit the ball from up there. Monty Mole’s hero is Pianta and his Villian Special Shot is Bullet Bill Launch where he hops in a red dome shaped thing with three cannons he then shoots a three Bullet Bills one out of each cannon, the Bullet Bills then lock onto Pianta, hit him, and then launches him back, Monty Mole then finishes it off by throwing a Bob-omb At Pianta causing a mini explosion. If Pianta used Villian Shot Cancel as soon as the cut scene starts the Bullet Bills will instead turn around and hit the red dome exploding it causing no harm to Monty Mole or Pianta.

Monty Mole is a playable character in the Koopa Kart series in every game, being one of seven characters to appear in every game (the other six being Bowser, Dry Bones, Koopa Troopa, Hammer Bro, Goomba, and Paratroopa). He is a middleweight driver in the first four games, while he is a lightweight starting from Koopa Kart DS. In Koopa Kart: Double Trouble!!, his partner is Popple, and their Special Item is the Chain Chomp. 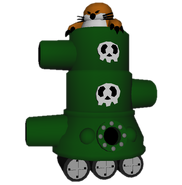 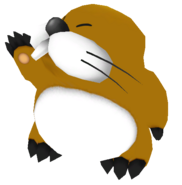 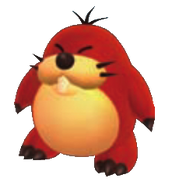 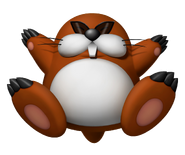 A Monty Mole with a helmet on. 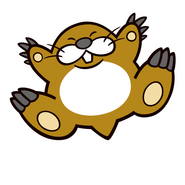