Monokuma is the mascot character of Spike Chunsoft's Danganronpa murder-mystery franchise. Monokuma is introduced in the series' first instalment, Danganronpa: Trigger Happy Havoc, where he usurps the role of headmaster of Hope's Peak Academy after executing the former-headmaster, Jin Kirigiri. During the events of the Killing School Life, Monokuma acts as the proxy of the mastermind behind the killing game, and serves as a "host" of sorts by dictating and upholding the rules and moving the killing game along by offering motives to the unwilling participants of Hope's Peak Academy's Class 78. Though the Monokuma that appears in Danganronpa: Trigger Happy Havoc is a robot, he was initially a plush doll that Junko had made and placed within the courtroom underneath the school - he was present in the courtroom to "watch over" the students of Class 77-B as they were brainwashed by the torture of the "hope" that kept them all together.

The Monokuma robots were manufactured by child genius Monaca Towa, who had them designed by her family's corporation - the Towa Group - under the guise of them being household assistance robots. After The Biggest, Most Awful, Most Tragic Event in Human History began, Monaca and Junko used these robots to spread despair by destroying property and committing murder. A digital Monokuma was also programmed and smuggled into the Neo World Progam designed to rehabilitate the Remnants of Despair, and served as the host of the killing game set within this virtual world. Footage of Monokuma from the Killing School Life broadcast was later reused by Future Foundation chairman Kazuo Tengan to "host" the Final Killing Game designed to pressure Ryota Mitarai into broadcast his brainwashing video designed to spread hope and eliminate despair.

Due to the climax of Danganronpa V3: Killing Harmony suggesting that all previous events in the series existed purely within fiction, this would leave the enigmatic Team Danganronpa as the bear's true creators. Nevertheless, even within the fictional universe of the Danganronpa franchise, Monokuma serves as the mascot of the meta-fictional Danganronpa television program.

Monokuma is the "father" of four sons (Monotaro, Monodam, Monokid, and Monosuke) and one daughter (Monophanie) - together, these five make up the "Monokuma Kubs" that primarily do the dirty-work that Monokuma doesn't want to. This follows Danganronpa 2: Goodbye Despair, where he remodelled the rabbit-like "teacher" of those trapped within the Neo World Program, Magical Miracle Girl ☆ Usami, into a pink imitation of himself that he dubbed "Monomi" and [forcefully] adopted as his little sister.

Monokuma is a robot designed to resemble a bear of comical proportions. Half of the bear's body is white, while the other half black - the split between these two shades is supposed to mimic the idea of both the "yin" and "yang" ideal within Chinese philosophy as well as the balance between "hope" and "despair". While the two shades that colour his body are separated straight-down his centre, the areas that cross this line (namely his snout and stomach) are coloured pure-white. His frame is noticeably rounded, and Monokuma has a prominent X-shaped belly button protruding from his belly.

Perhaps Monokuma's most recognizable feature is his left eye. While the eye on the right-side of his body mimics the neutral stare of a typical teddy bear, the eye on the darker side is instead a jagged horizontal stripe of a red colour. This red eye appears to be some sort of light, which can brighten in intensity at the controller's discretion; the Monokuma units controlled by Junko, her artificial intelligence counterpart, and Team Danganronpa throughout the events of Danganronpa: Trigger Happy Havoc, Danganronpa 2: Goodbye Despair, and Danganronpa V3: Killing Harmony noticeably make use of this effect by intensifying the eye's light to match when Monokuma becomes angered or serious.

Starting with Danganronpa 3: The End of Hope's Peak Academy, Monokuma's design went through several small changes. While mostly the same, the black side of his body was dulled to a dark grey, and Monokuma's overall body shape was made chubbier.

Monokuma appears as an unlockable playable character in Jake's Super Smash Bros., and is one of the two representatives of the Danganronpa series. In the game, Monokuma is a very comedic character who has strong attacks with often well-exaggerated motions. Monokuma lacks any projectile attacks in his moveset, instead making use of his claws to fight at a close range. Monokuma can also make use of the shield that the Guard Monokuma unit types from Danganronpa Another Episode: Ultra Despair Girls wield, which can be used to reflect and absorb projectiles. His Final Smash is a recreation of the first execution featured in the Danganronpa series: Jin Kirigiri's "Blast Off!" execution featured in the opening of Danganronpa: Trigger Happy Havoc. This attack sees Monokuma summon a rocket ship in front of himself, which will trap all nearby foes, before it launches upwards and crashes back down, detonating as it hits the ground. 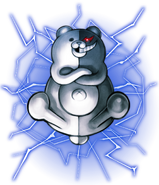 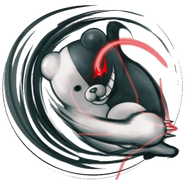 Retrieved from "https://fantendo.fandom.com/wiki/Monokuma?oldid=3238881"
Community content is available under CC-BY-SA unless otherwise noted.