Monita is the female host and guide for the Wii U Game Nintendo Land. Her purpose is to help players out when starting the game and helping them get started. She also tells you how to play the attractions in the park. She joins in some of the games such as Luigi's Ghost Mansion where she helps out the Ghost Hunters if there are less than 4 of them, or in Takamaru's Ninja Castle where she gets kidnapped after telling you the rules of the game, and she later talks to the player telepathically on the second stage. In Pikmin Adventure and Metroid Blast, the player is introduced to Dark Monita. Dark Monita is the "Evil Overlord", and is essentially alike to Monita (but is a separate character, as both Monita and Dark Monita have been seen on screen at once), but the only difference in appearance from Monita is her Purple Jester Hat. She is sometimes seen in a typical looking "Evil Spaceship", dropping down enemies (Both from the Pikmin and Metroid universes, depending on the attraction game you are playing).

Monita is a robot. She wears a hat, and a bow. She has a big monitor with a simple face (it's mouth moves very little when speaking - this is the only movement her face makes). An arm pops out of the bottom of her monitor, with balls that allow it to move like a joint.

Please add information about this character pertaining to your game! 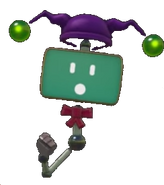