Mona Carpaccio, most commonly just known as Mona, is a young woman who has worked a variety of jobs in Diamond City. Her main job, though, is her job as a pizza delivery woman of the restaurant, Mona Pizza. She seems to have a crush on Wario and appears to be his very first love interest. There has been no signs that the crush is reciprocal. Of all of Wario's workers, she's his favorite.

Mona is a teenage girl attending high school. She has a rather fair skin complexion and long orange hair, although her hair appears to be shorter in Game & Wario. Mona's hair often has two bangs over her face, although, in later appearances, a third one was added. In the majority of her appearances, Mona has blue eyes with orange eyelashes. In Game & Wario however, she has solid black eyes. She is also seen wearing some form of headgear in almost every one of her appearances. She is also shown to wear makeup from time to time.

Unlike most characters, Mona's outfit has changed in every one of her appearances. However, Mona's general design appears to resemble that of biker gear, what with her attire consisting of a white mink fur coat, a red sports bra, a red mini-skirt being held up by a brown belt with a blue buckle, and red boots. When working, she wears more formal attire. In WarioWare: Twisted! (in which she works as a pizza delivery girl), she wears a yellow tank top, a blue and yellow baseball cap, blue skirt, yellow socks, and blue rollerskates. An alternate version of her artwork in WarioWare: Twisted! depicts her wearing a similar outfit, but all traces of blue and yellow in her outfit are replaced with red and white accents. In WarioWare: Touched!, Mona (depicted as a bass guitar player) wears a red dress, red gloves, and a large striped hat with sewn eyes. The bass she plays is yellow and green with heart and star motifs.

WarioWare: Smooth Moves depicts Mona as slightly taller and older with even more of a slim build than before, wearing formal cheerleading attire. She also ties her hair back into a mini-ponytail while wearing this outfit. Within the same game, she is also seen wearing a red qipao and has her hair tied back in an even larger ponytail during the intro and ending cutscenes for Young Cricket & Master Mantis' story. She also appears to be wearing a bit of makeup, as seen in her official artwork for the aforementioned game. It is this more mature look that seems to have stuck with Mona for every game starting with WarioWare: Smooth Moves, with the exception of Game & Wario. In WarioWare: Snapped!, being a park employee, Mona wears a white and green uniform with a headphone and a small hat. Mona takes up the job of an explorer in WarioWare: D.I.Y., where her outfit is mostly pink. Mona is also depicted with small earrings and a little bit of makeup, similar to her appearance in WarioWare: Smooth Moves. In Game & Wario, Mona is a photographer. Due to the notable universal design changes found in that game, Mona now has a more circular face shape, shorter hair, and appears slightly younger than her previous appearances. This design is later used in Rhythm Heaven Megamix. In her opening cutscene, she wears makeup.

In all of her appearances, Mona is seen as enthusiastic, fun-loving, tomboyish, spunky, thrill-seeking, and having a knack for adventure. However, Mona can also be very lonely at times, since she rarely ever sees her parents. In the Super Mario Revival series, at first, Mona feels a bit left out and lonely since she is the only one in the group of heroes who does not have any magic or special powers. But soon, she realizes that she is still special and powerful even if she's just a regular human being.

Mona is a player on the Wario Muscles team on the multi-player Wii sports game Mario Rugby League. She is a speedy character with good skill and poor strength. Her special skill is throwing a pizza as an extended tackle.

Wario & Geno: Saviour of the Stars

Mona appears as a damsel in distress in Wario & Geno: Saviour of the Stars, alongside the Star Spirits and Wario's money. She was kidnapped by King Dedede to protect her from the real villain who wanted to kill her for unknown reasons, and it was Wario's secondary goal to free her.

She is in Team Wario, as a speed character.

Mona appears in New Super Mario Baseball on Wario's team. Her stats are still unknown. In the introduction, Mona and Wario are seen making out in the baseball closet. Once they are revealed, Wario is shocked, but Mona closes the door. After the door is closed, ounds coming from the closet door indicate that they continue kissing.

Mona appears in Super Duper Smash Bros. as a playable character from the Wario Series. She is ranked second on the tier, due to her fighting technique, and light weight physical attacks,.

Mona appears as an unlockable character in Mario Kart Powers. In the game, she is a medium-sized character who is unlocked by beating POW Cup on 50cc as Wario, and then again as Waluigi. Mona's signature Kart colors are pink, silver and steel blue.

Mona appears as an unlockable character in P-Floatie Racers. To unlock her, the player must beat the Star Cup in 150cc or just play as Wario five times in any Single Player or multi-player mode. She's a mid-light character, her P-Floatie is maroon colored and has a front view of her scooter as the decal.

Mona appears in WarioWare: 3 Dimensions with a new level theme: "Dance and the Important Music". Ini is her partner in the minigame, "Race ..... For Your Life".

While Mona is absent in the first three seasons of Super Mario Revival,she makes her first appearance in the fourth season,Super Mario Unite!. She had come from Diamond City and into the Mushroom World in order to help Mario and Wario to defend against the new evil. She is usually allied with Princess Shokora and Queen Merelda.

Mona is just a normal human being, and is the only hero in the whole Super Mario Revival series to not have any magic or special powers. Instead, she fights while riding on a special scooter, called the Cutie Star Scooter, which Professor E. Gadd made for her. It has many gadgets and inventions equipped into it to help her attack. She can shoot lasers from it and even pull out a pizza from it to distract enemies and tempt them.

In the past, Mona has had many jobs (in different games); working at an ice cream shop, a pizza delivery woman, a rock star, an explorer, a photographer, and now, Mona claims that fighting evil is her new "job".

In this series, Mona appears in her Game & Wario design (with a red shirt and brown shorts) rather than her original design (with the white fur coat).

Mona has a variety of non-magical attacks which she uses to fight. Most of them require the aid of the Cutie Star Scooter. 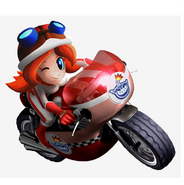 Mona riding on her bike.

Mona riding on her scooter.

Mona riding on her scooter in Game & Wario.

Mona, along with Merelda and Shokora on a Super Mario Revival poster.