Missyntile (Missyntae as the singular noun) is a species of reptilian bipedal creatures that reside in the Fantendoverse. Their home planet and history is mostly unknown for the most part.

Missyntiles have yet to be really explored by Fantendoverse Species Analysts, however with recent controversies over Doomulus Grime, the species' history may finally come to light.

Most Missyntiles have four clawed fingers and three clawed feet. They have slick, sometimes wet skin with several glands that allow to them to remove toxins from their system. Some can even remove their skin and grow new ones over the course of a couple weeks. Some even have gills that allow them to breathe underwater. Most Missyntiles have a unique set of horns that either trail from the back of their head or are placed on top of their head and extend outwards. Some also have markings on their head. Like the Beorns, the most notable trait of female members of this species tend to be their eyelashes, which extend out into interesting patterns.

There is a broad range of subspecies of Missyntiles, although the extent and variety has yet to be explored. It's a fascinating time to be a Fantendoverse Species Analyst!

Missyntiles are rather tall and have good speed and strength to them. They have claws that allow them to cling to surface. Their skin includes multiple glands to take out toxins. Some members of the Missyntile family tree have removable skin or gills. 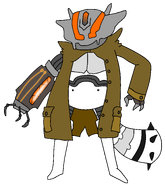 Doomulus Pepper
Add a photo to this gallery
Retrieved from "https://fantendo.fandom.com/wiki/Missyntile?oldid=3127381"
Community content is available under CC-BY-SA unless otherwise noted.