Mint the Dog mainly known as Mint Chewers his full name is a main playable character in the Gumball the Dog (series). Mint is a minty-green anthropomorphic dog.

Mint is a 12 year-old blue anthropomorphic dog, who has long, minty-green hair similar to his fur, light chocolate brown eyes and has a small tail which has a paintbrush tip on the end of it, which he uses when painting on canvases. Mint is usually covered in paint and other art materials and tools and is usually seen holding or even using them. Mint wears an orange berret, a striped black and white shirt with a paintbrush on and he wears a pair of orange shoes that match his berret. Mint is an average size for his age, but is one of the shortest characters compared to other, older characters. Overall Mint is very similar to Gumball.

Mint is a very easy going and relaxed dog, but sometimes to relaxed, or in other words, lazy. Mint can sometimes have a hyper moment where he is very mischievous and likes to mess around and have a laugh, but then he'll start to run out of energy and tire himself. Mint is a very friendly dog and is very chilled about everything, well most of the time. Mint takes the same traits as artist sometimes too, Mint is very imaginative and creative and he loves to stand out from the crowd. 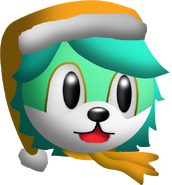