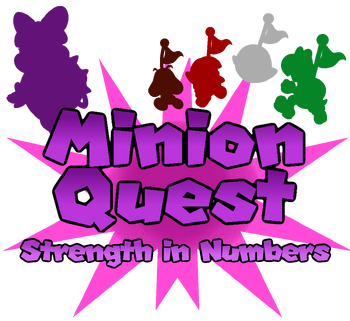 Minion Quest: Strength in Numbers is a tactical RPG developed by Crash Co. for the Nintendo Switch. The game is a followup to the side modes in Mario & Luigi: Superstar Saga + Bowser's Minions and Mario & Luigi: Bowser's Inside Story + Bowser Jr.'s Journey; it has a similar gameplay style, though is its standalone title and not tied to any Mario & Luigi game.

The game takes place directly after the events of Super Mario Odyssey. Bowser is sitting at his throne room, soured that his planned wedding was ruined and blaming Mario's meddling. Meanwhile, several of Bowser's high-ranking soldiers are arguing about what their next course of action should be, with all of them blurting out ludicrous plans to take out Mario, as well as throwing insults at each other. Fed up with the fight, Bowser says that it's not only bad enough Mario ruined his wedding, but none of their plans are good enough to take him down.

Then, a Goomba intervenes, running past everyone and up to Bowser. He recognizes this Goomba as the one who saved him from the Beanbean Kingdom, and the one he stripped his captain rank of after he made him suffer amnesia. The Goomba says that there are many villains throughout the Mushroom Kingdom, such as the Kremling Krew, the Secret Society of X-Nauts, the Snowmads, the Black Sugar Gang, and others, and that if they recruit all of them, Mario won't stand a chance. Bowser at first doesn't want to get their help, seeing as it would hinder his reputation as a "final boss", but because it's the only good plan he has, he goes through with it anyway. He temporarily gives the Goomba his captain title, puts him in charge of the operation, and orders him to find his other associates and give them their captain privileges too.

Captain Goomba then runs around the castle in search of his friends. He finds Captain Shy Guy tending to the Piranha Plant gardens, who joins him out of boredom. The two then accidentally fall into a trap set by Captain Koopa Troopa, causing them to get squished by a Thwomp. He records the whole thing and posts it to his prank channel, bragging about how he already has millions of followers on Tweeter. Captain Shy Guy tells him to knock it off and help them find Captain Boo.

They find him tending to Wendy O. Koopa's room, since he was demoted to janitor. After hearing the plan from Captain Goomba, he gladly joins them, saying cleaning the Koopalings' rooms is a nightmare. Wendy walks into the room, and shouts at the others to get out. Captain Goomba asks why she is so angry (with Captain Koopa Troopa making a joke about rings and Captain Shy Guy opening up a window to let wind in), and she explains that she's just jealous that Bowser got to have a wedding when she couldn't even get a single date. Captain Goomba urges her to keep trying, but she angrily shoves the captains out of her room as response. Captain Shy Guy comments that she must be "at that point in life", but Captain Goomba brushes it off as naive jealousy, and says that they should leave to recruit the other villains now. A small squad of troops is also provided for them.

Captain Goomba and the Goomba Squad board the Koopa Cruiser and set course for Crocodile Isle in the hopes of recruiting the Kremling Krew in their ranks. Just as they are approaching the island though, they are spotted, and the island's Blast-o-Matic is fired, piercing through the Koopa Cruiser and destroying it, leaving them stranded on an island chain near Crocodile Isle. Captain Goomba recovers some of his minions, but encounters a Kritter who aims to dispatch them to get rid of the intruders. Using the small group of troops he has, the Kritter is bested, and tells Captain Goomba to finish him off. He quickly denies the offer, and instead suggests making him a captain for the Goomba Squad. The Kritter is hesitant at first, as it would mean going against his race, but he accepts after realizing how capable of a fighter the Goomba is, and joins his ranks under the new name of Captain Kritter.

The two search for the other captains, as well as the rest of the Goomba Squad. Captain Shy Guy is surrounded by Klaptraps and Captain Boo is held captive in a barrel by Klobbers. While searching for Captain Koopa Troopa, Captain Kritter mistakenly falls for a trap set by him, encasing him in a barrel and sending him into the ocean. The other captains berate him for the prank, and get Captain Kritter back on land. With the entire Goomba Squad recruited, they continue their mission to storm Crocodile Isle.

The Goomba Squad manage to reach the island, and end up encountering several Kremlings along the way, some of which join them. Eventually, they reach the top of the island, where the Kremling Krew's leader, King K. Rool, is found. Despite the Blast-o-Matic being fired earlier, he was asleep for the whole time, and is enraged when intruders wake him up. He asks them what they want, and Captain Goomba offers an alliance between him and Bowser to take down Mario. K. Rool says Bowser can deal with Mario on his own, and that he has his own rival, Donkey Kong, to worry about. Captain Goomba suggests that the alliance can help him defeat Donkey Kong as well, which interests K. Rool. However, he says he must battle the squad himself to see if they're worthy of him. Throughout the battle, King K. Rool goes through various forms to attack in different ways. After being defeated, he commends the group for their strength, and joins the Goomba Squad as a first officer, and even offers transportation on his Gang-Plank Galleon. As they leave Crocodile Isle however, a shadowy figure is seen at the top of the island, and jumps to the Blast-o-Matic, saying they left at the perfect time.

On the ship's bow, Captain Syrup reveals herself as owner of the ship, the Sweet Stuff, saying that they're on the Black Sugar Gang's territory. Captain Goomba then realizes that she was one of the villains he aimed to have join Bowser's army to defeat Mario. He asks her bluntly about joining the army, with Syrup scoffing at the thought. Captain Boo points out that it won't be so easy to convince a pirate to join the Goomba Squad, while Captain Goomba still thinks he can convince her. Syrup tells the rest of the Black Sugar Gang to pull up the Gang-Plank Galleon and lock the Goomba Squad up while they loot the ship for treasure. Enraged, King K. Rool retaliates by firing a cannonball from the Blunderbuss, but a Penkoon retaliates by reflecting it back at him, knocking him out. Several more Penkoons attack, and the rest of the Goomba Squad are captured easily.

In the Sweet Stuff's dungeon, King K. Rool is moaning about how the treasure he worked so hard to steal is being stolen, with Captain Boo snapping at him to get a grip on himself. Captain Shy Guy wonders how they will ever escape the prison. Just then, one of the guard D.D.s knocks the other ones out with his boomerang, grabbing the keys from one of them and unlocking the cell. Captain Kritter asks why he helped them, with the D.D. replying that he was in a similar position as them, stranded and being found by Captain Syrup, forced to join the Black Sugar Gang. He offers to help them in any way he can, and in return, Captain Goomba happily gives him the title of Captain D.D.

With their new teammate, the Gooomba Squad break through the Black Sugar Gang's defenses, eventually reaching the ship's lowest corridor where the Gang-Plank Galleon has been held. Captain Syrup and a few Penkoons are looting the ship, and Captain Goomba stops them. Syrup asks how they got out and why one of her own crew members is helping them, with Captain Goomba answering that it is wrong to force others to join your crew, saying that by experience he learned establishing a friendship with them is much better. Syrup says that what she does with her crew is none of their business, and challenges them to a fight. Captain Goomba accepts, and the Goomba Squad charge into battle.

After being bested, Syrup questions why she lost, with Captain D.D. pointing out her not having a good relationship with the rest of the Black Sugar Gang being the reason. He also says that she should treat her crew mates better, since they do everything for her. Captain Goomba offers again for her and the Black Sugar Gang to join the Goomba Squad, but she declines, saying that it won't be worth it. However, Captain Goomba says that if she helps Bowser's army defeat Mario, she will be entitled to some of Bowser's treasury. She asks how much she can get, with him saying that Bowser is the richest king in the Mushroom World. Now interested in the offer, she tells the Penkoons to get off the Gang-Plank Galleon and let the other crew members know they joined the Goomba Squad. Captain Shy Guy and Captain Boo ask if offering her Bowser's treasure was a good idea, with him saying that Bowser wouldn't mind at all. Meanwhile, King K. Rool runs to the Gang-Plank Galleon to reclaim his stolen treasure.

Back at Bowser's Castle, Wendy is laying on her bed, bored. She says to herself that she wishes she could have a wedding like Bowser, and be married to a handsome man and live a happily ever after, claiming it would be a much better fate than spending her time with six brothers. However, an alert sounds throughout the castle, saying that intruders have been spotted. Wendy looks out the window and sees a giant, flying fortress heading towards the castle, with it having Crocodile Isle's Blast-o-Matic attached to it.

In battles, fights between two squadrons of troopers will ensue. These battles play out automatically, with the troops attacking each other and either damaging opponents or missing. Occasionally, quick-time events can occur, where the player must use action commands to help a trooper land a powerful attack. If there are multiples of the same trooper, these attacks can be even stronger.

The main goal is to take out the opposing squadron's captain. Once it is defeated, all of the other opposing troops will run away. The same applies to the player's squad, however. Levels are split up into numerous fights with different squads of enemies, ranging from three to eight. After a battle is done, every troop will be fully replenished for the next battle. Throughout the battle, Captains can also use special abilities to help give them the edge in combat. Troops have their own individual stats, which increase the more that troop is used in battle.

A squadron consists of nine units, with seven regular troops, a First Officer, and a Captain. The troops, as mentioned, are split into three categories; Melee, Ranged, and Flying. The troops used in a squadron will level up when the battle is over, and more troops will join throughout the game. Every troop has their own strengths, weaknesses, and attacks.

All Captains have the abilities Deny, Rally, and Backup. Deny allows them to stop an enemy trooper from using a powerful attack, Rally boosts their trooper's Spirit, and Backup allows them to call in reinforcements.

Retrieved from "https://fantendo.fandom.com/wiki/Minion_Quest:_Strength_in_Numbers?oldid=2967268"
Community content is available under CC-BY-SA unless otherwise noted.