Mini Mushrooms are a type of Mushroom in the Mario series. They first appeared in Mario Party 4 as a pink mushroom with a pacifier before getting a design overhaul in the New Super Mario Bros. series and being changed into a small, blue Mushroom.

Mini Mushrooms turn Mario into Mini Mario. Unlike Mario, Mini Mario can jump extra high, spin more than three times in mid air, run on water and travel down Mini Pipes. However, getting hit once as Mini Mario will cause you to die.

The Mini Mushroom first debuted in Mario Party 4 and appeared as a pink mushroom with a pacifier. It allows the player to enter gates and play Mini Mini-Games, however the Dice Block is reduced from 1-10 to 1-6 whilst under the effects of the Mini Mushroom. It costs 5 coins.

Mini Mushrooms reappear in in Mario Pinball Land. They have mostly the same role where they can allow the player to enter small passages and collect extra Power Stars.

The Mini Mushroom recieved a design overhaul in the [[New Super Mario Bros. (series)|New Super Mario Bros. series]], being changed from a pink Mushroom with a pacifier, to an ordinary blue mushroom. It retains the same abilities as in previous installments, allowing the player to become small and go into Mini Pipes as well as being able to jump higher.

The Mini Mushroom appears in the DS version of Mario & Sonic at the Olympic Winter Games during the Adventure Tours story. Once again, the Mini Mushroom makes Mario become small so he can cross thin ice without it breaking.

In Mario Sports Mix, the Mini Mushroom shrinks opponents, causing them to not be able to hold onto a basketball, dodgeball or hockey puck. Whilst small, they also can't do spikes in Volleyball as well as not being able to perform defensive moves in dodgeball.

Mini Mushrooms appear as an item that can be shot forward like a green shell and shrink an opponent, causing them to move slower. 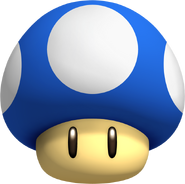 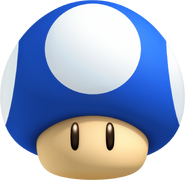 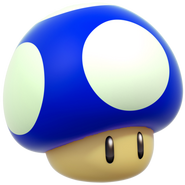 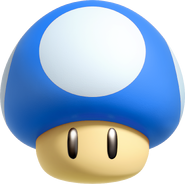 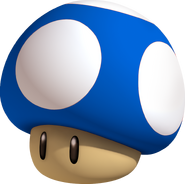 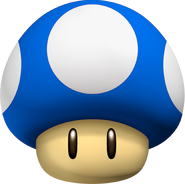 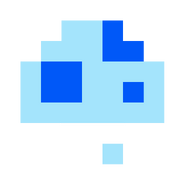 Mini Mushroom in the SMB1 style, designed by Exotoro (t∣b∣c) and initially used in Super Mario Maker Chi.
Add a photo to this gallery
Retrieved from "https://fantendo.fandom.com/wiki/Mini_Mushroom?oldid=3184961"
Community content is available under CC-BY-SA unless otherwise noted.