Fantendo - Game Ideas & More
Register
Don't have an account?
Sign In
Advertisement
in: Free to use Characters, Articles under Construction, Characters,
and 14 more

MineMan (also known as Doomulus Mine in the Boundless Fantendoverse) is the main antagonist of the PalmMan series. He was created alongside PalmMan and DragonMan in 4.15 and has acted as an adversary to the two throughout their adventures.

MineMan is a recurring villain, who repeatedly attempts to kidnap DragonMan with the intention of dismantling him. He of course is thwarted by PalmMan numerous times. In PalmMan Worlds, MineMan has split the universe into 27 areas, one containing only MineMan himself.

MineMan is the main villain in the Story Mode of PalmMan Online, and on Sunday nights past 11:00 PM, you will find him hiding in the city as a salesman. He will sell you armor from the Mining theme.

MineMan was part of The Masters of Evil in Fantendo Civil War.

MineMan appears as Doomulus Mine in the Boundless Fantendoverse, acting as the main antagonist of PalmMan (Boundless Game). In this game, he is the main antagonist, serving as a member of The Doomuli and commanding the group's base of operations on Silmhatik. He is highly aggressive and short-tempered, especially regarding PalmMan, and often has to be held back by his superiors. Doomuli defenses are severely weakened by PalmMan, after he activates an ancient weapon constructed by the Silmhatiki people, ultimately allowing PalmMan to confront him and emerging victorious, forcing Doomulus Mine's defeat and stalling the intergalactic advance of the Doomuli fleet. 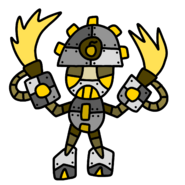