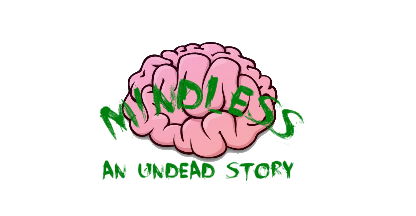 Mindless is an open world action adventure developed by Revelation Heroes Entertainment exclusively for the Nexus. It aims to give a fresh view on the Zombie genre, mixing open world gameplay with Zelda-esque bosses and exploration.

The game focuses on Bill, a zombie merely wanting to go about his day and maybe find a nice meal, growing stronger and more powerful as he claws his way up the food chain.

Mindless is an open world game, in which you control Bill through the game-world in a never ending quest for food. Bill gains new powers by defeating and devouring bosses, which help him evolve.

These abilities help both in accessing the world and combat. Combat is relatively simple, intially being restricted to swiping, blocking and biting. Later, Bill can dodge attacks and use various abilities such as acidic spit and lunges.

Bill is initially a garden variety zombie with no special abilities. It is only by defeating bosses that he will gain new powers. However, Bill doesn't only gain new powers. These bosses also increase intelligence. Eventually, Bill will be able to comprehend human speech.

In The Hunt, a team of four zombies chosen from 8 different classes complete missions together in the open world, hunting down humans. This mode plays relatively similar to the Singeplayer, with each class having different abilities that Bill gains throughout the game. The Hunt has it's own campaign.

In Versus, a team of four zombies fight a team of four humans. Gameplay occurs across several maps, with the zombies and humans trying to eliminate each other or complete objectives.

This is a synopsis. For the full story, see Mindless/Story. Bill was just a regular zombie until the day he ate Zeke.

This is a synopsis. For the full story, see Mindless/The Hunt.

Bill - You are Bill the Zombie. His interests include long walks on the street, brains, sleeping, and not being killed.

George - Bill's friend George doesn't say much, mostly speaking in moans, but he is always there to help when Bill needs him most. He hangs out at the Graveyard.

Rosetta - Rosetta is the Queen of the Rawrgunuff zombies, to which Bill belongs. She often commands them to wander into new territory or force other zombies out.

Lucky - The former owner of Lucky's Pub, Lucky is Rosetta's most loyal servant.

Angela - A human Bill meets, Angela is the first human who hasn't tried to kill him, and, the first human he hasn't wanted to eat. Angela assists Bill in evolving by giving him quests to kill other zombies.

Frank - Angela's boyfriend and a renowned Zombie Hunter. Obviously he has a few issues with Bill.

Retrieved from "https://fantendo.fandom.com/wiki/Mindless?oldid=2672773"
Community content is available under CC-BY-SA unless otherwise noted.