Free to use! Fantendo users can use this character without specific permission.
“Come on, let's test your skills out!”
— Millyrain's battle quote. Wholly unoriginal, but still average?

She's a tetromino in a U-shape, wears black-and-white gloves, and wears some boots. Her color depends on what symbols there are. She also has a "Pliri", which serves as a... bow? Whatever. It has flower-like properties and depending on her mood changes color with her mood.

Millyrain is mainly calm in her tone, but very serious on the outside. However, she is not FULLY edgy or serious, she is somewhat cute and likes to go date with others. She's mainly calm.

Meanwhile, she is trying to find a "familiar face she met but doesn't remember", and when doing that, she is usually serious.

Her whole moveset relies on her symbols. In a similar way to the whole Kirby 64 fusion thing, she can mix and match her symbols for special powers. A Congregate symbol allows her to summon various stuff (numroid warriors and those things) and a Splurge symbol allows her to do AOE attacks such as a shockwave. Some symbols give her special powers like fire resistance or temperature handling, and a normal movement move or something. To also note is that she can perform a powerful mixture attack which is, well, powerful. Take the last symbols mentioned and put them together and she can perform Splatrise, where she creates a shockwave which raises 5 Poundies. That's not all she can do, though! There is infinite possibilities that it cannot be counted! However, it doesn't change no matter if you change the order of symbols. It just changes her looks but nothing else.

On the much more material side, she also has X-0. That's basically Numroid Zero made by someone, but X-0's main capabilities is firing out lazers and especially doing similar moves to what Juicebox does in Crashlands. However, this thing cannot speak, and therefore cannot even do a single bit to help give info to Sis (her short name), so if she wants to record notes, she must throw Snatchelor onto someone to have data about them. This can be accessed later on, though just to note Snatchelor is metal, thus people complained about Snatchelor. Also, she has one runic robot called Twitch. Unfortunately Millyrain has no idea what Twitch is even for, but she does know something about the socket whenever she uses a Phrenic symbol.

And just to note, without symbols she's really weak and black and white, filled with hopelessness. This is the only state where she can truly die on, because any other deaths just have her being knocked out.

She has an immunity to dark magic and death... well, unless she doesn't have her symbols.

She appears in a few Numberlemon episodes but got replaced by a generic unknown NL-5. Her debut appearance has her first managing to kill Whoopee Cushner (landing from the comet), scaring Squarangl'r and Alex to the point they run like, quote on quote, "stupid men", running back and forth through non-existent doors. She soon confuses them as psychos, with Squarangl'r trying to stop her with a duck gun (but promptly fails). After Alex gets "choked to death", she assists Squarangl'r in saving the day, managing to defeat some Cures and be able to power him up to Squareshot, as Squareshot shoots out dank memes(?!) from his eyes.

In the World Tournament, she did pretty well (beating Umbra Shader) until Doomulus Thai came in, getting beaten by her ("...you didn't make it super far into round two after all…" - Unten). During the redemptions, Millyrain gets beaten by Spree. She barely was even mentioned until the Finals, on the ??? part, where she helps in defeating Aura Angel Asuna (getting Unten and Heroforce symbols to do that), being responsible for blowing Asuna back, but unfortunately she ended up getting trapped. Afterwards, she doesn't get a mention. Not a single one. No quotes or anything like that. It is suggested that after the events, the events of "Five Fives to Combat" started.

Millyrain appears in Fantendo's Card Cataclysm as a Hero Card being the only character from Numberlemon to be represented.

Millyrain with the Glaize and Cerasus symbols

Millyrain with Unten and Heroforce symbols, possibly her most powerful form 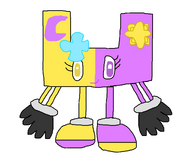 An artwork of Millyrain made by Redwing, which is depicted SLIGHTLY differently.

Her appearance in Fantendo Fisticuffs, by Crakabo. Notice that this is probably the first time someone at Fantendo doesn't depict her with two arms. 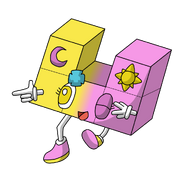