Mike Jones was the protagonist of 1990's Star Tropics and the 1994 sequel Star Tropics The Revenge Of Zoda which were released only outside of Japan. However after this he was never featured in another game again until he was revived by Vined Inc. with a minor appearance in Captain N: The Game Master and a cameo in Captain N: Outskirt Warriors. His series StarTropics was then revived with The Return: StarTropics III.

Mike had saved his uncle, defeated the great alien Zoda twice, traveled through time and met some of the most influential people in history and saved an island full of children including a tribal princess. He was a great hero in his own regard however he was soon abandoned and the Master Hand flung him into the outskirts.

He was a minor member of the Outskirt warriors in Captain N: Outskirt Warriors but he was one of the first to sign up sick of being left behind in obscurity.

By the time Captain N: The Game Master came around Mike had been promoted to a general in the Outskirt Warriors. He had become even more determined to leave after several of the generals were plucked out by the Master Hand after the last war including co-founder Little Mac.

Mike Jones is the one who found King Charles when he was thrown into the outskirts. He formed a close friendship with Sukapon who was promoted by Takamaru at the same time as him and he has great respect for their leader Takamaru.

Mike makes his firs starring appearance in sixteen years in The Return: StarTropics III. By now he has moved in with his Uncle-J on C-Island and has continued to practice his baseball skills teaching the local islander kids. Peter, the talking parrot from the original StarTropics is now his pet, more by Peter's demand than Mike's actual choosing but he doesn't complain. NAV-COM has been retooled as a friend for Mike by his uncle however he still misses the Argnonians he saved all those years ago, particularly their princess Mica.

When Mica uses her telepathic link with Mike to warn him that Argon has been overrun by a dangerous foe - which she doesn't specify, Mike is quick to jump at the opportunity to go and save her with his Uncle's permission he takes the space ship and sets off to the Argonian galaxy first to collect the Tetrads to build the homing device to find the princess. He soon finds that its more Zoda clones that he must defeat. As he progress across the planet and the moons to find her, his reunion with Mica is only sweet before he has to defeat the strongest Zoda clone of all. After defeating the clones Mike has to return to C-Island and say goodbye to the Argonian princess once again. 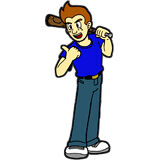 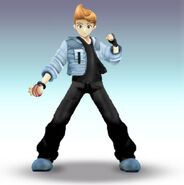 Mike Jones, as he will appear inThe Stories of New Tendo City