Fantendo - Game Ideas & More
Register
Don't have an account?
Sign In
Advertisement
in: Free to use Characters, Ink's Stuff, Characters,
and 13 more

View source
!
This page is the creation of IncarnateParanoia.Unless otherwise stated elsewhere on the page, everything here requires the creator's explicit permission to edit or copy.
IncarnateParanoia50
“*creates fire on her hand* This is completely illogical.”
— Mika, experimenting with her new powers for the first time

Mika Sho is an Asian American student and science geek who possesses the mutant ability to summon and control fire by manipulating elements. She was originally created by Drack (t∣b∣c), then later given to Locky (t∣b∣c), and then even later given to Ink (t∣b∣c).

Mika is a relatively thin-looking girl. Her bright orange hair is usually tied back in two pigtails. Her brown eyes tend to glow when using her powers, but it is unnoticeable outside of complete darkness. She dresses exclusively in reds and oranges, and is usually seen in a jacket, skirt, tights, and boots.

Mika is ultimately a friendly person to be around, with her sunny outlook and ever-cheerful expression, but she shows signs of anti-social behavior, and at times she prefers to be on her place quiet either studying or doing something else. She often takes things at face value and fails to notice jokes or sarcasm, although she is quit a sharp joker herself. She is a budding young scientist, and tends to know way more than a girl her age should about chemistry and other subjects. As a result of all this, she usually comes across as weird or eccentric. Being able to set things on fire with a snap of her fingers doesn't really help with this reputation. Though a self-stylized hero, Mika is actually fairly cowardly, and when fighting more fearsome enemies her main strategy is usually to run away from opponents until she can come up with a reliable counteroffensive. She does not currently show any interest in romantic relationships, and has yet to even discern what exactly she is attracted to.

Mika is a big fan of science fiction and often quotes some of her favorite fictional spaceship crew members from memory when she feels they're especially appropriate. She also shows interest in superhero comics and as such nicknamed her friends, whom also have weird power themselves, with superhero-like nicknames. Her own "secret identity" is Sunfire. Her powers tend to burn through calories (ha ha), so her eating habits consist primarily of absurd amounts of carbohydrates and sugars. She's particularly fond of potato chips.

Mika Sho's main ability is pyrokinesis through the manipulation of elements at a sub-atomic level. She can create fire at will, and manipulate it with high precision as long as she remains focused on it. With enough concentration, Mika's flames could theoretically become so concentrated and precise that they can burn atoms apart or weld them together to perform "alchemy" to transform a nearby element into a totally different element, but such an ability could only be used very sparingly simply because of how much energy it would require to maintain that level of precision, and she has yet to actually demonstrate this power despite being very much aware of it being a possibility. Releasing her control over her summoned fire lets her create an explosion instead, but she usually doesn't rely on this due to its uncontrollable nature. She is also able to immunize herself against heat when completely focused, allowing her to bathe her physical attacks in flames without fear of harming herself, but fire can still harm her if she isn't willingly using her powers.

On the flipside, Mika has the physique and physical abilities of an ordinary scrawny nerd. Without her powers, she can usually be overpowered by pretty much anyone with a decent amount of strength.

With characters outside of the New Fantendoverse

Mika appears as a playable character, and was added on February 23, 2015. 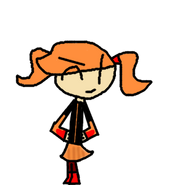 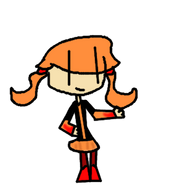 Artwork done by Exotoro (t∣b∣c) for an Art Swap, later reused for Fantendoverse X: Time and The Uncanny Adventures of Sunfire 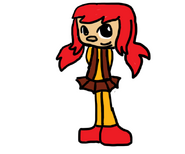 The first artwork by Yvetal.

The second artwork by Yvetal.

The third artwork by YE. 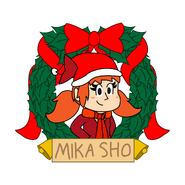 Mika in an Adventures of White style. 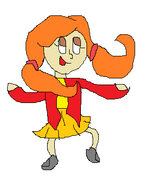 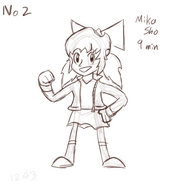 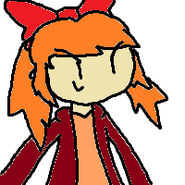