Mighty the Armadillo (sometimes just Mighty) is a friend and rival of Sonic the Hedgehog. He was a former member of Team Chaotix.

Mighty makes an appearance as a playable character in EEA Inc.'s version of Sonic Speedball RPG IV, Sonic Speedball RPG IV: Speedster Mania. He is first found in the oceans of Mobius along with Espio the Chameleon where they both join up with Sonic, Silver, McBoo, PalmMan, 3.14, and Starfy.

Mighty makes an appearance in Sonic Heroes 2 as part of Team Knuckles alongside Knuckles the Echidna, Shade the Echidna and Ray the Flying Squirrel; Mighty knew Knuckles from Knuckles' Chaotix, Ray through SegaSonic the Hedgehog and Shade through Knuckles.

Mighty is an unlockable.

Mighty appears hanging out with Knuckles, Alex Kidd and Joe Musashi. If you walk past him he will say 'damn'.

Appears as a villain working for Robotnik alongside Fang the Sniper. The deal he made with Robotnik has yet to be revealed but his motives are based off a desire to be in a starring role again.

Mighty appears as a VIP character, meaning he can sometimes be found in the audience and spotting him gives the player a reward. He is the rarest of all the non-seasonal VIP characters. 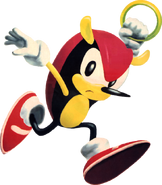 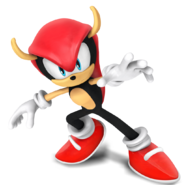 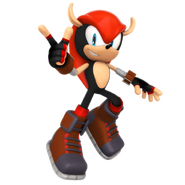