Start a Wiki
“Halt, you little pink-bag! By the orders of his great lightness, I shall end your insolence with my mighty light magic!”
— First Mightlight encounter, Kirby & Magolor: Huge Trouble!


Mightlights are a powerful mid-boss species in the Kirby series, often being in the service of Exateno, the Ultimate King of Light. They are notable for giving the upgraded Light Copy Ability for Kirby to use upon their defeat.

A Mightlight is a very large mid-boss; in fact, they are among the largest mid-bosses, dwarfing even the imposing Bonkers. There are even a variation called Mega Mightlights that are even larger.

They have a pale face, with the eyes having long eyelashes, shiny beige hair and a golden helmet with a blue crystal implanted on the front.

It also wear a large purple robe, with yellow, teal and blue stripes. There is also an emblem that resembles of the EX Star Army's symbol. They are less tall when being a Helper/Friend.

Male variants do exist, but the only difference is instead of eyelashes, they have white eyeshadows. This makes the male and female Mightlight strikingly similar aside of that one detail.

Mightlights are powerful, capable of producing light from their hair and model them into spikes, lances, swords and even a pair of fists. They also float indefinitely, in which they are not expected to fight on the ground, but in the air.

Despite their largeness, they are also fairly resilient, being able to take more damage than most mid-bosses. They also deal more damage than even Bonkers, but they have a more severe end-lag on their attacks.

Mega Mightlights are more powerful, and have a doubled amount of health, but also slower on movement speed.

As a Helper/Friend, their Ability is the Light Ability, using the same moveset of Light Kirby, but instead of losing it with the newly powerful Light Flash, they will have a cooldown on such move, in which in this case, it make Mightlight a Friend a preferable choice than keeping the Light Copy Ability in some cases.

Although the personality of a Mightlight varies between individuals, many shares their great loyalty towards Exateno and will do anything to help out his conquest. The Mega Mightlights tend to be very domineering towards enemies does to their larger size and power.

The Mightlight Friend is shown to instead hold grudge against Exateno does to taking over planets with an iron fist, making her an outcast among the Mightlights. As a result, she rather live a peaceful life, but will help out Kirby and friends if called. 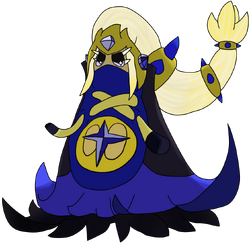 Titan Mightlight is a gigantic and more powerful variant of Mightlights, which are also much rarer and are considered as an effective boss because of a similar amount of HP to a standard boss.

Their clothing are also different to emphasize on their much more gigantic size. For one, their cloak become longer and have a second, darker colored layer underneath. The main cloak is unified otherwise, and have attaching ropes with two ends that hangs on downwards.

Their hair become attached with three spiked collars, with the collars being shiny gold and the spikes being blue. Only the tip of their hair remain spiky.

In addition to standard Mightlight attacks, Titan Mightmight can use their hair to slam down environments, which can destroy even solid objects. This in turn warns the player to be quick on eliminating a Titan Mightlight, otherwise they will end up having no spaces left to defeat them.

They can also summon a rain of bright stars that explodes into bright light on impact. They are too large for Kirby to inhale them unless he uses the Giant Ability, in which he can inhale them or push them back at Titan Mightlight.

Mightlights' debut game. They are one of the multiple mid-bosses of the game, and they are among the strongest mid-bosses among with Bonkers, Bugzzy, Chef Kawasaki and Iron Mam. Just like all mid-bosses, they also have a more powerful giant form called that instead of being called a Mega Mightlight, they are called a Titan Mightlight.

They are also one of the two Light Ability Helpers/Friends, the other being Cool Spirit. Mightlight have a much lower chance to be summoned than Cool Spirit, but also have even more health than the fragile Cool Spirit. The Light Flash also do not delete either Helper/Friend, and instead implement a cool-down of two minutes before they can use it again. 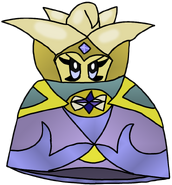 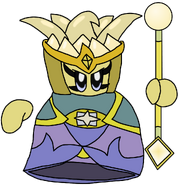 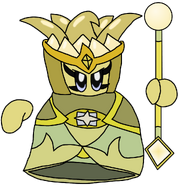 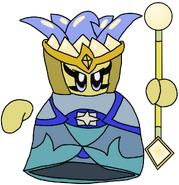 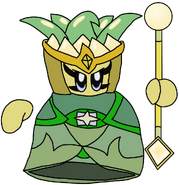 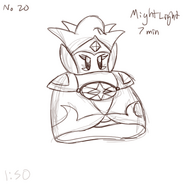 Retrieved from "https://fantendo.fandom.com/wiki/Mightlight?oldid=3285253"
Community content is available under CC-BY-SA unless otherwise noted.