View source
“You. You. No longer needed. You taste defeat.”
— Midbus

Midbus, known as Metaboss in Japan and some European regions, is a brawny, unintelligent, anthropomorphic pig-like creature who debuts in Mario & Luigi: Bowser's Inside Story. He is an underling of Fawful who was tasked with guarding Bowser's Castle and fighting Bowser if and when needed.

Akin to his master's tendency to speak in Engrish, Midbus speaks in broken sentences in the style of a poorly dubbed kung-fu movie, and gives unnecessarily long names to various weapons that he uses (an example is him referring Junker, a boss in Bowser's Inside Story as "Super Ultra Great Mega Trashy Monster Junker Bot").

Given his physical similarities to Bowser, he may have been created as a foil to the Koopa King. He is also shown to be able to survive fire as shown when Bowser breathed fire on him when fighting his Castle.

In Mario & Luigi: Bowser's Inside Story, when Bowser first encounters Fawful, he sends Midbus to battle him. During the battle, Fawful unintentionally teaches Bowser how to use his action commands on Midbus. Due to the effects of the Vacuum Mushroom, Bowser ends up getting weakened, and Midbus and Fawful abandon him, but not before telling him that they plan to take over his castle.

Later, Fawful puts Midbus in charge of Bowser's Castle, his now secondary base, along with Bowser's now brainwashed minions. Once Bowser appears, Midbus animates the castle, and makes it drop on the Koopa King. Thanks to the Mario Bros., however, Bowser becomes gigantic in size, and does battle against the animated fortress, eventually winning. Once Bowser gets inside his castle, he realizes it's been completely changed. The Koopa King finds out that Fawful made a piece of the castle into a gigantic auditorium with a big stage at the end of it. Inside the auditorium, Fawful is seen hosting some kind of show or act. Once Bowser interrupts the performance, Fawful sends Midbus to battle again, this time inside a large cage.

In this battle, Midbus attacks in various ways. One of Midbus' most prominent moves is his body slam move (which he also did at the beginning of the game), he'll bounce three times on his belly, then jump into the air either directly above Bowser or a little to the side. If the former, Bowser must press Y so that Midbus will land on his spiky shell rather than his face. If the latter, he must punch Midbus away or make Midbus land on his arm or risk getting the shockwaves from Midbus body slam turn him upside down. This move can Confuse Bowser or flip him over for the latter. He also will grab a wrecking ball and swing it rapidly. As Midbus approaches Bowser, he must duck and hold there for three seconds, then Midbus will spin back, but before he stops, he'll either have the wrecking ball up high or down low, if it is up high, Bowser must duck the attack, and if its down low, Bowser must punch it away. This move can confuse. His last move is sucking up all his energy for a giant punch. Bowser must rapidly punch his belly to cancel his attack. He can also counter the second Midbus grabs his belly in pain, and hurt him with a punch. This move can flip Bowser on his shell. If he executes any his moves correctly on Bowser, the Audience will throw him Coins (which are useless) and Food which Midbus will eat to heal. Every food will heal him 10 except for the drumstick which will heal him 50. Bowser can Inhale the food to use himself which will do the exact thing but drumsticks make his Attack go up and heal 50. If Bowser makes any of HIS moves excellent, Bowser will receive coins.

After Bowser finally defeats Midbus for the second time, he is rewarded with a banquet feast. Unfortunately, his brainwashed minions stuff him continuously with food until he gets so bloated he falls partway through the floor and gets stuck. Fawful and Midbus later return to find the Koopa King stuck in the floor. Fawful uses a ray gun on Bowser, which he needs to locate the Princess inside Bowser's body. Eventually, a light emerges from Bowser's body, and the princess emerges on top of Fawful. The duo then leave with the princess in tow, but not before Midbus brings out a treadmill (and ignores Fawful's orders to help him carry the princess), which Bowser uses to bring his weight back to normal.

Later, in Princess Peach's Castle, Mario, Luigi and Starlow meet Midbus for the first (and so far only) time. Midbus, holding a sort of remote control, presses its button, making the large pile of trash nearby form into Junker (although Midbus calls this creation Super Ultra Great Mega Trashy Monster Junker Bot) so as to hinder the Bros. quest. After Junker is defeated, Midbus retreats into another area of Princess Peach's Castle.

Later in Peach's Castle, Bowser encounters Midbus yet again. However, Fawful powers his minion up, and the pig becomes Blizzard Midbus, whom Bowser must fight in order to progress through his adventure.

During the battle, Blizzard Midbus can use many ice-related attacks. In one of his attacks, he can jump onto a colossal snowball and try to roll over Bowser with it. There is a Bob-omb sticking out of it which Bowser must punch to make the snowball explode. After Blizzard Midbus' HP is halved, he sometimes hides the Bob-omb so the player will have to remember where it is.

Blizzard Midbus can also send Snawfuls out of his crown to attack Bowser. They can breathe icy mist at Blizzard Midbus, and for every Snawful that breathes icy mist on him, he recovers 30 HP and increases defense. Bowser can inhale them, though, and allow Mario and Luigi to battle the small foes, and if they defeat five or more Snawfuls, then Bowser will spit out the icy mist they release from being defeated, and freeze into an ice chunk that lands on top of Blizzard Midbus' crown, preventing him from releasing anymore Snawfuls. Blizzard Midbus also attacks by using snowballs. If he looks at the snowball, he won't throw it at Bowser, but if he looks at Bowser before throwing it, it will go towards him. If Bowser can defend himself from 3 snowballs or more, Blizzard Midbus will attempt to do the sliding punch on him. It can be countered, as usual. Once again, he attacks by body slamming Bowser, but he does it differently this battle. He requires some Snawfuls on the battle field to execute the attack. Blizzard Midbus will climb to the Top Screen and scale a wall. During this, Snawfuls will pelt Bowser with ice balls, so he must duck to avoid damage, then after a few shots, Blizzard Midbus will bounce off a wall, and slam from above. Bowser must duck to damage him. Blizzard Midbus may also bounce off of two walls and slam in front of Bowser, so he must punch him to deal damage, but this attack will be tricky to defend against, since sometimes, a Snawful will throw an ice ball at Bowser while Blizzard Midbus prepares to slam toward Bowser. Bowser's Fire Breath can cause a lot of damage to Blizzard Midbus. Most of Blizzard Midbus' moves can cause the Sick status to Bowser.

After Blizzard Midbus is defeated, he becomes frozen in a gigantic block of ice. He then begins pumping out an infinite stream of frosty gas from his snout. Bowser needs to use the gas to help the Mario Bros. progress inside his body.

It is unknown what happened to Midbus after the events of the game. If followed logically, he may have thawed out by then, or been arrested by the Toads who were rebuilding Peach's Castle. Due to the power-up taking over him, it is also possible that he may have died. This is supported by the fact that the frosty gas may be the air his lungs formerly contained.

Midbus appears in Mario Soccer League as an unlockable team captain. He is a tricky type.

Midbus appears as the boss of World 5, Low Landing, in Super Mario Bros.: The Lost Worlds. Midbus' fight isn't too different Bowser's in that Mario must defeat him through the same methods, but Midbus uses different attacks than Bowser, like throwing a spiked ball or doing a bouncy belly slam. When he performs his belly slam, he bounces three times before landing back in his idle. Mario must get under him and hit the ax to defeat him or pelt him with enough fireballs.

Midbus appears as a starting racer in Mario Kart: V² Circuit. He is a heavyweight with large size. He has poor speed, good acceleration, slightly above good handling and slightly above average traction.

Midbus will appear as an unlockable newcomer in Super Smash Bros. Galactic Battle. Although Midbus shares some moves with Bowser, he is considered a very loose semi-clone, as many of his attacks resemble those of both pigs and armadillos, similar to the animals that Midbus appears to a fusion of.

“Go be trashy in this trash hole with this trash robot forever!”
— Midbus
“WHAT!? No one pressed 'dance'! You are broken!”
— Midbus
“Now it is time! Now we will fight! Then you will lose! And you will cry!”
— Midbus 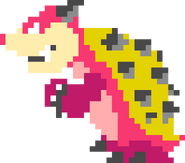 Midbus as he appears in Super Mario Bros.: The Lost Worlds.