Micaiah (ミカヤ Mikaya), also known as the Silver-Haired Maiden, is a playable character, primary protagonist of the first part of Fire Emblem: Radiant Dawn, and one of the two main protagonists in the overall story. She is a wielder of Light Magic and the de facto leader of the Dawn Brigade. She has the unique skill, Sacrifice, which allows her to give up some of her HP to heal a selected unit. Micaiah is the first main character since Celica from Fire Emblem Gaiden to fight with magic, and the first main character in the series to use it almost exclusively.

She is voiced by Lani Minella in the English version and Kuwatani Natsuko (桑谷 夏子) in the Japanese version.

Before The Mad King's War

Before Mad King Ashnard declared war on Crimea, Micaiah's early occupation was that of a fortune teller in Daein. During this time, she met a young boy named Sothe, where they promised to look after each other forever. However, due to the fact that Micaiah was Branded, the prospect of Sothe traveling with her and catching the backlash of the prejudice she would receive was unthinkable, and with that, she left him. They were reunited after the war, whereupon she promised never to leave him again.

Micaiah and Sothe then proceed to join up with Nolan, Edward, and Leonardo and form the Dawn Brigade, a group of freedom fighters officially led by Nolan to fight for a free Daein. Micaiah greatly distrusts Ike, blaming him for Daein's plight, despite never having fought alongside him during the Mad King's War.

The Dawn Brigade unearth a rumor that the son of Mad King Ashnard, Prince Pelleas, is secretly raising a liberation army in Daein's Desert of Death. The Dawn Brigade finds an abandoned fort in the desert where Pelleas is supposedly hiding out, helping the then small Liberation Army defend against the attacking Begnion soldiers.

Once the soldiers have retreated from the area, the Dawn Brigade meet up with Prince Pelleas and his assistant, Izuka. Pelleas recognized Micaiah instantly as the Silver-Haired Maiden, and immediately appoints her as the vice-commander of the Daein Liberation Army. At first, Micaiah and Sothe are reluctant to accept the role Pelleas is imposing upon them, but eventually decide to comply.

Once Daein is freed from Begnion's rule, Pelleas promotes Micaiah as the supreme commander of Daein's armies.

War with the Laguz

When the Laguz Alliance learns that Begnion has committed the unforgivable crime of killing an innocent Laguz messenger, alongside being responsible for the destruction of Serenes Forest, it then declares war upon said country. King Pelleas then proceeds to order Micaiah to lead Daein's armies into battle - On the side of the Begnion empire. At first, no one could come to an understanding as to why Pelleas has chosen to make such a decision, but it is later revealed that the King had unknowingly signed a blood pact with the Begnion Senate during his coronation ceremony after Daein's abdication from Begnion's rule. This essentially means that Daein is placed under full control of the Begnion Senate, to which it was ordered to eradicate the Laguz Alliance.

When the goddess Ashera is interrupted from her thousand-year slumber and awakens, she petrifies everyone on the continent of Tellius, including the vast majority of Micaiah and Ike's armies. The only non-petrified people are known as the "Chosen Ones", all of whom have been placed under the protection of Yune, the Goddess of Chaos. Yune intends to undo the petrification imposed upon the afflicted, but is unable to do it herself, as she lacks the power to do so. She then possesses Micaiah's body to explain that the only way to undo the petrification is to travel to the Tower of Guidance and defeat Ashera. During this time, it is revealed that Micaiah is Empress Sanaki's long-lost older sister, and the true apostle of Begnion.

After Ashera falls to the forces of the Chosen Ones, Micaiah will become the 15th Queen Of Daein at her subjects' entreaty, ushering a new era of peace and prosperity after Pelleas. If the automatic A-rank support Micaiah shares with Sothe is retained till the end of the game, she will marry him.

Micaiah is a very caring individual, but tends to be somewhat bitter at times, a result of both her treatment as a Branded prior to the story and the abuse of Daein and its citizens by the Begnion Occupational Army. She is particularly resentful towards Ike, whom she blames for the state of affairs in Daein, and expresses this distaste whenever Sothe speaks fondly of him.

Micaiah is extremely loyal to Daein and Pelleas, to the point of fighting the Laguz Alliance even when she sees no reason to do so, and refusing to give up when faced by the Greil Mercenaries.

No information available at this time. Please expand if you have her in your game! 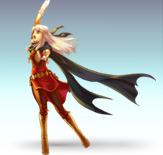 Add a photo to this gallery
Retrieved from "https://fantendo.fandom.com/wiki/Micaiah?oldid=3038085"
Community content is available under CC-BY-SA unless otherwise noted.