Mewtwo is the genetic clone of Mew, the 151st Pokémon. As opposed to Mew's cute appearance, Mewtwo is portrayed as tough. Mewtwo also appears in some Super Smash Bros. games, and in Nintendo vs. Capcom and Nintendo vs. Fantendo.

While it is not known to evolve into or from any other Pokémon, it can Mega Evolve into two different forms: Mega Mewtwo X using Mewtwonite X and Mega Mewtwo Y using Mewtwonite Y. Despite what some fans may tell you in #Fanon appearances below, it's a genderless Pokémon; it's also in the Undiscovered group and can't breed.

Mewtwo is a Pokémon created by science. It is a bipedal, humanoid creature with some feline features. It is primarily gray with a long, purple tail. On top of its head are two short, blunt horns, and it has purple eyes. A tube extends from the back of its skull to the top of its spine, bypassing its neck. It has a defined chest and shoulders, which resemble a breastplate. The three digits on each hand and foot have spherical tips. Its tail is thick at the base, but thins before ending in a small bulb.

Mega Mewtwo X is larger and bulkier than its normal state. The horns on its head are longer and extend from V-shaped ridges on its forehead. Additionally, the horns are now pointed and curve upward. It now has two tubes behind its neck, its eyes are light blue, and it has large, purple growths over its shoulders. Its torso is smooth and small compared to its long, bulky limbs, and a Y-shaped line connects the collar and underbelly. Its forearms and thighs each have two raised ridges and its digits are now longer and thinner. The tail is slightly shorter and stiffer than before and has a curled tip. Its muscles are augmented with psychic power, which increases its strength and sprinting abilities. When using moves in battle, it is shown to be able to stretch its arms and legs.

In comparison, Mega Mewtwo Y is smaller and lighter, losing its long tail and the tube behind its neck. However, it grows a long, purple appendage with a curled tip from the back of its head that is similar to its previous form's tail. On its head it has two pointed, backward-curving spikes and a half-ring structure connecting to base of each and crossing over the top of its head. Its eyes are now red and slightly larger. The digits on its hands and feet are now purple and more bulbous and the middle toe is longer than the others. A bumpy ridge similar to a sternum replaces the breastplate structure on its chest, but this form is still largely smoother than the other two. Despite its size, it has phenomenal mental power, and is capable of smashing buildings with a mere thought.

Mewtwo was created after years of horrific gene splicing and DNA engineering experiments based on Mew. It is said to have the most savage heart among all Pokémon, lack compassion, and strike fear into its enemy with cold, glowing eyes. Because it was engineered to be the ultimate in battle, it can only think of defeating its foes. In the first movie, where it was shown to be capable of levitation, telepathy and mind control, Mewtwo exemplified these vicious characteristics. However, it was later shown to be caring, protective, and even altruistic. Another Mewtwo in the anime shared its aversion to contact with others, but was much less belligerent.

Mewtwo conserves energy by remaining motionless in order to unleash its full power in battle. It is also capable of materializing psychic waves in the form of its signature move, Psystrike. Though rarely seen in the wild, it is said to be resting in a dark cave somewhere.

According to the scientific logs found in the Pokémon Mansion of Cinnabar Island, Mewtwo was born from a pregnant Mew, found deep in the jungles of Guyana, whose embryo had been tampered with to alter its DNA. It was held and studied in the mansion where a scientist performed horrific gene-splicing experiments that made it vicious and extremely powerful. It eventually broke free of the Mansion, destroying it in the process, and fled. It can be encountered in Cerulean Cave, accessible only after a Trainer has proven his or her skill at the Indigo Plateau.

The games leave it ambiguous as to who created Mewtwo, but other continuities explicitly define Mewtwo as a Team Rocket creation. Ultra Sun and Ultra Moon may have acknowledged this by having Mewtwo be on Giovanni's team in the "Team Rainbow Rocket" sidequest.

Mewtwo has also been a playable character in the Super Smash Bros. games. Present in every installment except Smash 64 and Brawl (and initially Smash 4 until DLC happened), Mewtwo's abilities didn't appear to translate very well to Smash. In Mêlée, it was considered one of the worst characters in the game! In Smash, Mewtwo levitates itself a few inches off the ground, making it floaty and giving it low traction. It fights primarily with its neutral special, a projectile, and its side and down specials, trolling moves.

Mewtwo will be appearing in the Nintendo DS game Pikachu's Quest.

Mewtwo will be appearing in Nintendo Trainer. His role is unknown, though he is assumed to be a trainable Pokemon, as it is unlikely Pokemon themselves will be trainers.

Mewtwo appears as an unlockable driver in Super Smash Kartz.

Back to the Brawl

Mewtwo will be a playable character in Super Smash Bros. Madness, and his Final Smash will be Hyper Beam, an extremely powerful blast of energy.

If a player uses a pikachu amiibo while playing they will unlock Mt.Moon, Mewtwo appears as a boss battle on top.

The following Smash Bros. games on Fantendo have had Mewtwo as a playable character: 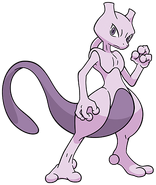 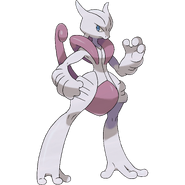 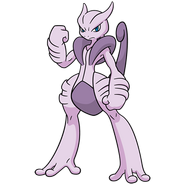 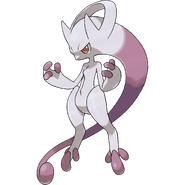 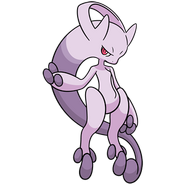 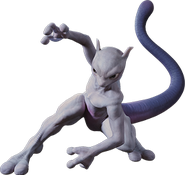 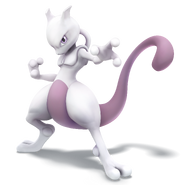 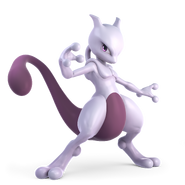 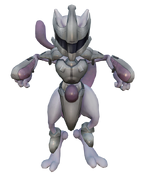 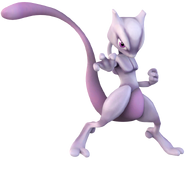 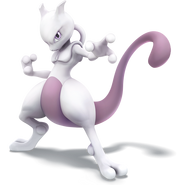 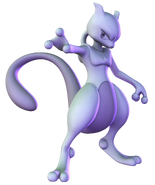 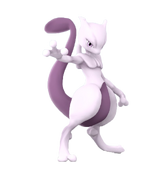 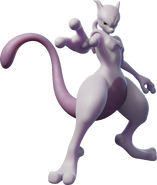 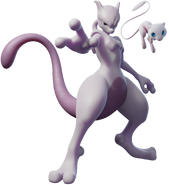 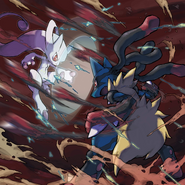 Mega Mewtwo Y in a fierce battle against Mega Lucario 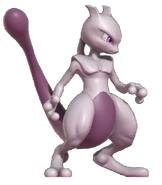 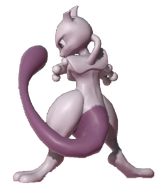 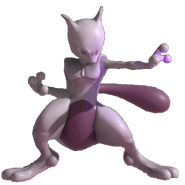 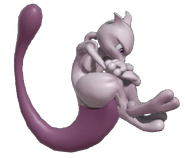 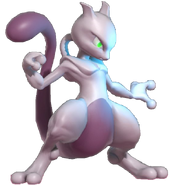 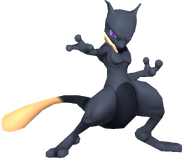 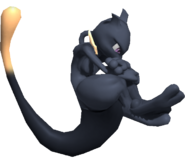 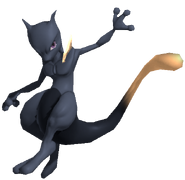