Three years after the events of Metroid Fusion, all is peaceful in the galaxy. When planet Clormine is under attack, Samus is put back in action. She must discover who is attacking the planet, while uncovering things that are from the shadows of her past.

The gameplay is similar to most 2D Metroid Games, however the game is 3D. The 3D feature was based off the 3D idea for New Super Mario Bros. The map, health and ammo status, and list of power ups are on the touch screen. 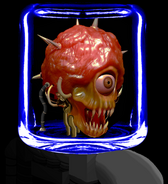 Mother Brain.
Add a photo to this gallery
Retrieved from "https://fantendo.fandom.com/wiki/Metroid:_Shadows?oldid=2879385"
Community content is available under CC-BY-SA unless otherwise noted.