Not to be confused with the power-up, used on Mario and other characters.

Metal Mario is a minor character in the Super Mario series. A character independent from Mario's metal power-up, Metal Mario originally debuted as a mid-boss in Super Smash Bros.. He later made other appearances within the Super Mario spin-offs, with appearances in Dr. Mario 64, Mario Golf and Mario Kart 7, among others. He is often described as a rival to Mario, akin to Wario.

Metal Mario is a grey metallic version Mario. In Mario Kart 7, he also has a black "M" logo on his cap, contrary to the other games where he appears.

Metal Mario is a major villain in Mario 3D World. In the end of the Second Quest, he is the Fortress Boss of Special World. In the Third Quest, he is one of Cosmic Monster's partners- the others are King Boo, High Max, and Queen Booline. He is the one who reveals the true plot.

Metal Mario is the Super Guide in Super Mario Bros. V he can be playable if you try the rest of it on you're own his difference from Mario is that his Jump is slightly shorter and when he lands on ground it kills all normal enemies on screen.

Metal Mario is the boss of World 4+, Neo Bowser City. He jumps around, countering your attacks and being immune to most projectiles. The only way to hit him is when he's busy firing his blue fireballs.

Metal Mario appears as a boss of the Hawa Kingdom, fighting similarly to how he did in Super Mario Stars. Unlike then, however, he only takes three hits to defeat.

Metal Mario is the first boss of the second world, the Techno Kingdom, in Super Mario Quartz, after being summoned out of magic by Kamek. He moves around similarly to Mario, trying to damage his non-metal counterpart by using ground pounds, spins and jumps. Mario will take damage from making contact with him, so the way to defeat him is to capture a Thwomp outside the arena and lure him towards it, where he will be crushed. After his defeat, he will drop a Multi Moon and the player will be able to leave the kingdom.

He is encountered again in the game's boss gauntlet, Solar Flare Wilds, where he fights Mario in a tag battle alongside Blue Silver Luigi. A similar method is used to defeat him - this time Mario must capture a Whomp to crush him. However, this is easier said than done because if Mario defeats one of the metal brothers, the other one will simply revive him, meaning he must defeat them both at once.

Metal Mario appears as an enemy in Super Mario Step. He was seen being shined by Kamek. He dances to a remix of his theme from the original Super Smash Bros.

Metal Mario will appear in the episodes Oh no! Super Kartastrophe! - Part 1 and Part 2. He will have a villain role along with Pink Gold Peach.

Metal Mario appears in Nintendo Emoji Match as a playable character. Metal Mario's power is; Metal Mario falls from the top of the board quickly falling down clearing emojis in his path. Metal Mario is a Rare character and can be unlocked by playing a round as Mario with the Chain Chomp Chain item equip then a round with the Coin Magnet equipped. 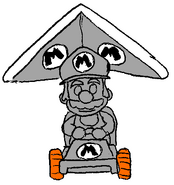 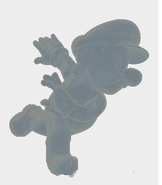 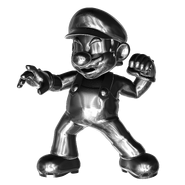 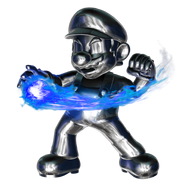 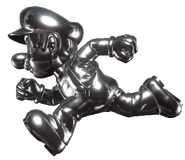 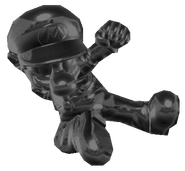 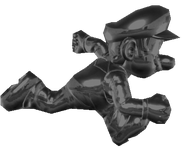 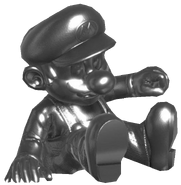 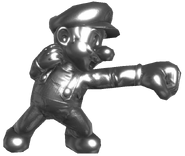