The Metal Cap is an item that turns Mario into Metal Mario. It first appeared in Super Mario 64 and then reappeared in Ultra Mario World.

In SM64, it was spawned from a green ! Block, which first had to be activated via a secret room in Hazy Maze Cave called "Cavern of the Metal Cap". The green ! Block later went on to appear in the Super Smash Bros. series, where it's named the Metal Box and gives fighters a metal effect without spawning a cap. In Super Mario 64 DS, the Metal Cap was replaced with the Power Flower, and the ability to turn into metal was given to Wario.

In this game it lets Mario use his signature moves underwater, but does not make Mario invincible.

The Metal Box appears in Super Smash Stadium, unchanged from its functions in the Smash Bros. games. It debuted alongside Monkey Smash Arena; however, the Metal Smash, in which all fighters are permanently metal, had existed for a little over 25 years prior. 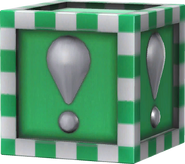 The Metal Box, as it appears in Smash Bros.
Community content is available under CC-BY-SA unless otherwise noted.
Advertisement