Four months after the events of Sonic Generations 2, Dr. Eggman breaks himself and Metal Sonic out of the endless time prison. Dr. Eggman upgrades Metal Sonic, sending him out to destroy Sonic the Hedgehog. Metal rampages though Station Square, destroying several buildings before finally finding his target. Metal almost defeats Sonic, but is actually defeated by the hedgehog. Not accepting failure, he betrays Dr. Eggman and heads out on his own quest to defeat all in his path.

Meanwhile, Dr. Eggman is creating a new Metal Sonic who is more then able to take on both hedgehogs at once. The new Metal Sonic, Silver Sonic II, finds Metal and fights him. Metal uses a nearby tree to whack the robot into comission, then leaves, taking the robot's Chaos Emerald.. Furious, Dr. Eggman sends out a missile to Station Square. If the player decides to disarm the missile, Metal races agaisnt the clock and manages to disarm the missile. If the player wants the missile to hit, Metal uses Chaos Control to warp away from the explosion. Either way, the missile attracts the attention of Shadow, and the two fight. Metal wins the fight, and collects his second Emerald from Shadow. Dr. Eggman, with his bittersweet failure, decides to take his time with the situation, knowing that the robot is not as powerful as his creator. However, Metal discovers how to use Chaos Blast, and uses it to invade Dr. Eggman's secret base. After a long run to Eggman's chamber, Metal's creator reveals his Egg Master mecha, and the creation and the creator duel it out. Metal wins, but not before Eggman escapes with a Chaos Emerald. Meanwhile, another Egg Master mecha invades Station Square, this time not operated by Eggman, but by Silver Sonic II. Metal defeats the Egg Master again, and wins his third Emerald.

Eggman, now scared of what can happen, decides to launch the Death Egg once again, but this time to destroy Station Square instead of building an army. Metal, unaware of the plot, duels with Sonic again, but loses once again, losing all of his Emeralds. Furious, the robot discovers how to use Chaos Spear, and knocks Sonic out, getting his fourth Chaos Emerald. With that, Shadow rematches the robot, and Metal defeats the hedgehog, but discovers he did not have an Emerald. Eggman, almost completing the damaged Death Egg, decides to send out the Egg Centipede, a gigantic killer robot that destroys lots of Station Square. Metal can stay on the good path and simply destroy the robot, or use its power for his own devices and absorb its energy. Either way, Sonic starts to respect his robot match, and shows him the happiness he has missed at Twinkle Park. Metal, seemingly brightened by the Park, decides to search for the fifth Emerald. He scans a nearby jungle, and finds the Emerald in an ancient temple guarded by the Egg Golem II. He wins the Emerald, and uses them to preform a Mega Chaos Blast, destroying the temple, but giving Metal a quick way out. Eggman, ready to launch the Death Egg, decides to send out one final Emerald guardian, the Egg Twister, piloted by Silver Sonic II. Metal fights the Egg Twister along with Sonic, and wins the sixth Emerald. Metal can either imprison Silver Sonic II, or take the evil path and beat him until he deactivates. If Metal takes the evil path, Sonic runs away, disgusted.

The Death Egg, ready to launch, finally launches into the air, but not before Metal hitches a ride on the main engine. Metal races though the Death Egg, destroying two Egg Master mechas at once before reaching Eggman. But instead of Eggman scared, he is surprisingly happy. He holds up the last Emerald, and they all begin to glow their respective colors. A giant mecha rises from the Earth, putting Dr. Eggman into its cockpit, and then absorbs the powers of the Emeralds. With no option left, Metal is forced to use the negative powers of the Emeralds to become Neo Metal Sonic. Neo gets into a timed fight with the mecha, and defeats the mecha. One final choice has to be made. Neo can either throw Dr. Eggman's mecha into the Death Egg, killing Eggman, or deactive the Death Egg's laser himself. Either way, in the ending of the game, you see Neo Metal Sonic sitting on top of the Death Egg, watching the Earth spin. Neo then rockets down to the planet, making his own choices...

Players control Metal Sonic, or Neo Metal Sonic, and can make their own choices or follow the story. Metal has two meters, a Health Meter, which tells your health, and a Chaos Meter, which is the limit for Chaos Powers. Metal can destroy almost anything and everything with a large arsonal of weapons. He can use the Unibeam, a laser fired from his core, Chaos Powers, such as Chaos Control or Chaos Blast, which takes up Chaos energy, cannons, spike launchers, lightning bolts, and super strength. Players can buy upgrades and more weapons from Tails' Old Workshop, but only after defeating the first boss, with the cost of Points, achieved by defeating enemies, making choices, completing missions and Chapters, and simply destroying the city. Players roam though Station Square, the hub from Sonic Adventure, and can travel to the Mystic Ruins, Angel Island, the crashed Egg Carrier, or even the Egg City, Dr. Eggman's base. Players can pick up cars, trees, streetlights, television antennas, people, or Dr. Eggman's robot minions. If Metal creates a large amount of damage on a building or bridge, it will collapse, falling to the ground, sometimes revealing prizes for the player. But however, with evil, comes punishment. G.U.N officers will chase Metal until Metal stops destroying objects. If Metal is evil enough, G.U.N trucks and robots will chase the robot, or even Sonic the Hedgehog can come to stop the chaos. In Neo Mode, Metal can rampage as Neo Metal Sonic, but only after you complete the story, dealing even more damage. Note that in Neo Mode, Super Sonic will fight instead of Sonic.

Mecha Sonic II, orginally abonded, but is achieved by beating the story making all "Evil" choices. 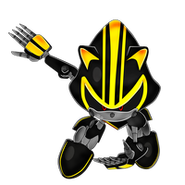 Christmas Metal, unlocked by pre-ordering the game at GameStop, or as late 2013 DLC.

Rocket Metal from Sonic the Fighters. Unlocked by beating Chapter 6, "Releasing Anger".
Add a photo to this gallery

Neo Metal Sonic fighting Shadow for a Chaos Emerald. Note that this is happening in Neo Mode.

A choice that occurs in the game. Will Metal save Sonic, or will he let the hedgehog be captured?

A cutscene after the first boss fight. Note that Neo Metal Sonic appears only because the selected mode was Neo Mode as the fight ended.

A cutscene that occurs before the story begins, showing how Metal was created.

The Main Menu title screen.
Add a photo to this gallery

After the Rampage Pack

The After the Rampage Pack adds another storyline into the game, letting Metal defeat Eggman Nega before he uses the Sol Emeralds to burn Station Square to a crisp.

Retrieved from "https://fantendo.fandom.com/wiki/Metal_(2013_game)?oldid=2060481"
Community content is available under CC-BY-SA unless otherwise noted.