Meta Knight is the name of the main antihero in the Kirby Series. He was born in Dream Land, and cares dearly about his home. However, if Dream Land makes a mistake, he will not hesitate to use violence to fix that mistake. He always comes across as dark and evil, however, in reality, he is actually a loyal being.

Meta Knight, as a swordsman, slices and dices with his one-handed sword. His attacks are very quick and executed in rapid succession. He can also harness energy to whip up whirlwinds and "sword beams". Occasionally, his cape will transform into wings, allowing him to fly with great speed. He has shown the ability to inhale, but this is rarely ever shown.

In Neverworld, Meta Knight is recruited by Dimentio and King Dedede to join The Chess Crew. He often argues with Dedede, sometimes in the middle of battles. Eventually, he leaves, exasperated, and is succeeded by Meta Knight II.

Meta Knight was found as an NPC in Yoshi's Island Omega. Here, Meta Knight was searching for Kirby. However, if Yoshi brings Kirby to the part where Meta Knight was, the Meta Mask was obtained as a reward. He is seen in World 1-3: The Cave of Chomp Rock.

Meta Knight appeared in Kirby: The Ultimate Fighting Magic! as a playable character. He has the same voice as he was in the Kirby's Coming At You! shorts.

Kirby's Coming At You!

Meta Knight appeared in the Kirby's Coming At You! anime shorts, which aired as a filler in TV Tokyo in Japan and on PBS Kids in the US. Unlike the games, Kirby: Right Back at Ya! and like Kirby's Avalanche, he speaks in a high-pitched voice, and has a childish nature, similar to Kirby's. Although he's not a robot (however, he has the robot modeled after him), his eyes flicker in colors when he talks. This only applied when he wears a mask. He appears in all episodes, depicting him as a main character and a friend of Kirby's. For some reason, he tried to outwit Kirby himself in the similar manner to old cartoons. Meta Knight also likes playing electric guitars, as seen in the short "Dedede and the Money Snatcher". Meta Knight even challenged Kirby to a Gourmet Race in "Food Race". He sometimes took his mask off, much like in games.

Meta Knight also appeared as the one of the main characters in the computer-animated series Kirby: The Starlight Adventures, created by IHI Productions, where he was a teenager instead of an adult. In this series, he is leader of the group of legendary beings called Star Fighters, until at the end of the final episode were his younger brother Kirby became a leader. He is able to harness the forces of his own sword, Galaxia, which charges up his power. He is voiced by Ian James Corlett.

Kirby: Into The Stars

Meta Knight appeared in the 2012 anime film, Kirby: Into The Stars, as a main character. He looks the same as his appearance in Kirby: Right Back at Ya!.

After once again being beaten by Kirby, he takes up a challenge from Devil Knight, an evil demon version of him, who said that if Meta Knights could beat him in a duel, he would give him a new body. After dueling him fairly, which Devil Knight didn't, Meta Knight won a new body, but before he left to go back to Dreamland Devil Knight called him a pathetic puffball.

Meta Knight is Kirby's rival in the war adventure. In addition, the Haileins ship, the Hailberd, resembles the Halbred, Meta Knight's ship.

Meta Knight appears as an ally, helping Kirby battle Dark Matter and the Demons on multiple occasions. He becomes a playable character after completing the game 100%.

Meta Knight appear as a sub-captain on King Dedede's team. He uses his sword as a bat. He has average batting and pitching, but is a fast character. In Exhibition Mode, his team is the Meta-Knights, referencing his soldiers in the Kirby series.

Meta Knight once again found himself getting defeated by Kirby, battling Galactia Knight, and becoming the universe's greatest warrior. But now, things have changed, as an evil empire of darkness sweeps over Dreamland. Soon, he finds himself on the battlefield as General Meta-Knight leading thousands of Dreamlandians in the Final Battle against the Dark Knight.

Meta Knight was dreaming about his mentor, the old Meta Knight, or Mr. Knight as he called him. In the dream Mr. Knight was fighting Dark Matter and got knoced off the edge of the tower they were fighting on. But not before giving Meta Knight, his apprentice at the time, his cape, which Meta used to try and rescue his mentor but only ends up getting Galaxia. After battling Dark Matter in his dream he woke up to find that Dreamland was in trouble, bigger trouble than King Dedede could cause, as it turned out, Kirby had been possessed by Dark Matter and was attacking everyone, so it was up to Meta Knight to save his planet.

Meta Knight has been announced to be an unlock able and middleweight racer. He is unlocked by winning a grand prix as Kirby and one as King Dedede, or by winning Castle Cup on 150˚cc Mirror Mode.

He will appear as a playable character and only obtainable after beating him in Story Mode , He can be playable as the 6th player ( Defualt ) , His slash attacks do great damage , He can do some abilities but weakened , He is the third heaviest , only losing to King Dedede.

After an alien invasion, Meta Knight leads a small group to combat it. He is the main character and wields many new weapons besides his iconic sword.

Metaknight is back in the Kirby Supertsar Adventure series, which is a reboot for the Kirby franchise, Metaknight didn't get a redesign in design, but he did get his Mach Tornado ability changed, for Season 1 and Season 2 of the show Metaknight acted as some sort of mysterious rival to Kirby, as he only appeared in certain episodes to fight Kirby, these episodes are "A horrible Metaknightmare", "Metaknight strikes back!", however he makes a small cameo at the end of "The final fight against The Silver Mask", Metaknight has been confirmed to appear in Seaosn 2 in an episode called "Metaknight again!?"

If you use a Kirby amiibo while playing you will unlock Mt.Dedede, Metaknight is a hidden race.

Meta Knight was snatched by the General’s army. When Kirby defeated him, he agreed to bring all of them into his reality.

Meta knight was snatched again by the Maporians after their crash. He is later encountered at the capital city when the Maporians had given him a new sword, now called Edge Knight. After defeating him, he retreats.

When Jakon is revealed to be the true villain and fuses several dimensions together including Kirby’s, meta knight with the help of the Maporians managed to get his ship, the Halberd and let Kirby drive it to defeat Morphon. It was heavily damaged when Primal Morphon used a burst of energy to destroy it, forcing meta knight to retreat to fix it. Meta knight used Kirby’s warp star to go back to dreamland while his halberd crashed into the ocean once more.

Meta Knight appears as one of the starting characters. 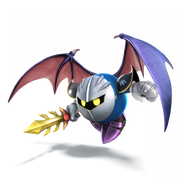 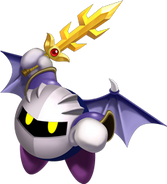 Meta Knight as depicted by User:TKThunder 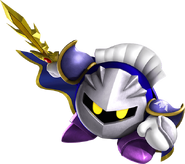 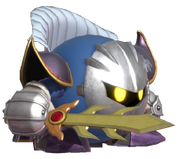 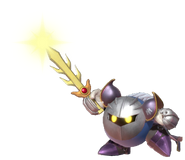 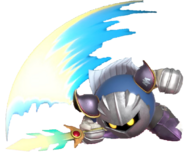 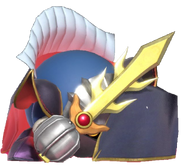 Quotes in the games