Meta-Form: Common Force (sometimes refered as Meta-Form 3: Common Force) is the third game of the Meta-Form series for the Nintendo Wii U. It will be released at the late 2016 and is considered as the last entry of the Meta-Form series' original triology. It also revealed that this game, as well as previous games, take place in the side-universe of the New Fantendoverse called the Secretverse, a lighter yet densier counterpart of the Fantendoverse we know today. It requires the use of the Wii U Connect add-on does to the game's much higher amount of contents than the other Wii U games.

It marks the first time where the Robot Cooperation of Nadian City and the Bad Bot Army are actually on the same side, in this case against Mr. Stelog, who use an ancient energy to create his own army, the Steloids.

It return the same 2.5D sidescrolling gameplay from Meta-Form (Game) but also keep the Special Ammo and HP mechanic from Meta-Form 2: Kube's Revenge. It also introduces Customization, which allows the playable characters to equip different mechanics including but not limited to Chips, Weapons, Equipments and Elements. The attack mechanics are also more advanced, as it now allows more Special Moves but also some that requires button combination like in traditional fighting games.

The enemies and bosses are also more advanced, as it can also perform more attacks and the Elements now have an influence to most of them. It is even possible give a special interaction as an intro when one of the players is using a specific character.

There are now vehicles, which the player can use them for various purposes, but most of them are used to solves puzzles rather than just attacking on enemies.

Most stages have multiple exits, but the last stage of the last world will always determinate which of the three final bosses will be faced. Beating the third final boss will then unlock the Lost Land, which you will face the true final boss.

In Nadian City, as Meta-Form and Cubey walked in the street, things had turned quiet after KiloBot's latest defeat. Meta-Form thought that he gave up for good and was happy that he learned to respect humans as they are not all bad, but Cubey is aware that he is up to something really big, and not something good for sure.

When they heard from King Kube KiloBot's screaming as he is falling, with his wings broken, they were surprised that it is not good, but not in the way they expected. "Watch out, boys!!" yelled desperately King Kube KiloBot, and the two heroic robots decided to run to avoid getting flattened by the Bad Bot King's really heavy weight.

After he landed in a metallic roof of an abandoned house, rear end first, he reacted by shrugging and said "It's still better than a faceplant on the middle of the street!" He tried to pull himself out but fails, among with Sedacy, landed with a jet-powered delta-plane, attempt to help him out, but failed. She asked Meta-Form and Cubey for help but the latter one wasn't sure about it, although the former one wouldn't be rude as if KiloBot would be stuck forever.

As Meta-Form tried to pull him out, Kube ordered him to stop in the first place, forcing Meta-Form to explained what happened to him first. Kube hesitated for a second, but then sighed and smiled. He said that Meta-Form wouldn't believe it, but that Mr. Stelog had somehow escaped prison and eventually hacked his new patented tower called the "KiloTower" and even stole most of his robot henchmen. He then left a sad face and then added that thinking about it does hurt him, and doesn't wanted the horror Stelog could do as he could potentially abuse the Bad Bots.

Meta-Form, who felt serried a bit, decide to leave, much of Sedacy's disappointment. King Kube KiloBot then said at Meta-Form and Cubey that he changed his mind and ask politely to help him to unstuck him. When he got unstuck, he begrudgingly thanked them, while Sedacy gave them a more sincere thanks, much of KiloBot's slight surprise. He then told him to not asking to join as he can handle the situation, but as it rains multiple of Bad Bots (under Stelog's order), he wasn't sure.

"Well, I heard about raining pigs, but raining robots seems out of context!" whined Cubey, before receiving a glare from KiloBot, which made Meta-Form to shove the former one and decide to run, but KiloBot had caught them. "On the other hand, it might be difficult to convince the RCNC!" worried KiloBot. "If they ever see me with their eyes, they will not hesitate to use the security system against me, even if I can singlehandedly shut it out, but then I will be distrusted for sure!"

However, the elder Dawelldon, driving from his anti-gravitational car driven by his assistant, told him that after what he hears, things will be fine. The four other robots are surprised and Meta-Form asked him why he followed him and Cubey, Dawelldon make it clear that he knew that Stelog will flee one day and worried that he will stole Meta-Form and Cubey, which instead happens to be worse. He tell the four that shall he dominate the planet, the aliens and the entire robots will be under complete slavery, and KiloBot became literally roaring mad as he heard the news, and will accept his help only to get his men and property back, much of Sedacy's relief. Dawelldon accepted the deal, and added that even KiloBot's heart is made of gold, which gave a mixture of embarrassment and flattered for KiloBot.

Character whose name in italic means that it is not a robot but another species. They use Equipments instead of Chips.

There are nine main worlds, with the last one only accessible when clearing all previous worlds. 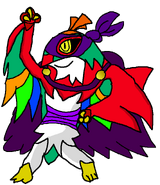 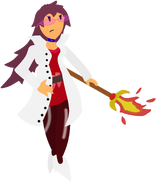 Captain Cube KiloBot
Add a photo to this gallery

Retrieved from "https://fantendo.fandom.com/wiki/Meta-Form:_Common_Force?oldid=3000223"
Community content is available under CC-BY-SA unless otherwise noted.