Merrin is a character created by CrakaboLazy4090 (t∣b∣c). She originally made an appearence in Battle for Fantendo, before making her official debut in the upcoming Sugar Cannon.

Merrin's body is composed entire out of ice cream, primarily vanilla, chocolate, strawberry and cookies and cream. She wears a neon green visor and apron, and her "hair" is fashioned into a ponytail.

Merrin is normally seen as cheerful, optimistic and caring to others. She has a devotion to protecting the Flavor Sprites and will stop at nothing to get them back.

Merrin can draw her powers from the Flavor Sprites in order to give her weapons to fight off against her enemies. The Flavor Sprite that's with her will determine what weapon she gets. She can have up to three Flavor Sprites at a time. She also has the ability to fly.

Merrin appears as the main protagonist of Sugar Cannon. Living in the Dessert Kingdom, she is responsible for protecting the Flavor Sprites, the guardians of Foodtopia. When the Flavor Sprites are captured and the evil Burgking is threatening to take Foodtopia over, Merrin, alongside a lone Vanilla sprite, seek to take down Burgking and save their friends.

Merrin makes an appearence as a DLC Character in Battle for Fantendo, alongside Lane from KillGames and a Rogue from Kingdombound, as part of the Crakabo DLC Pack. 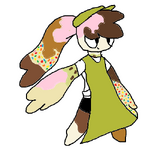