“Just as a flower comes from a seed, or a chicken comes from an egg, everything has an origin. You need to find the being originally responsible for this catastrophe.”
— Mephiles the Dark, Sonic the Hedgehog (2006)

Mephiles the Dark, or Mephiles for short, is a villain from the Sonic the Hedgehog series. His appearance is that of Shadow's but what he really is is of unknown origin, only that he is one of two results of a failed experiment. Mephiles took Shadow's form when the Scepter of Darkness was stolen by Rouge and broken, then an aura appaered out of it and absorbed "Shadow's Shadow", from then on Mephiles the Hedgehog was born, he looks just like him except for: He has Pale Blue stripes on his body not red, his eyes are Emerald Green not red, his voice is much deeper and his skin is a pale greyish green. Mephiles is the real Iblis trigger (not Sonic) To free Iblis, Princess Elise must cry. (the situation does not matter.) So, he snuck up behind both Sonic and Elise. Then he killed Sonic by taking his soul, by stabbing him with the power of darkness. Elise then weeped, causing her to free Iblis. Silver then finds out that Sonic is not the Iblis trigger, and helps to defeat Mephiles.

Mephiles the Dark is a major character in the Spursverse, first appearing in Super Mario Silver Spurs: The Crossover Vacation as the main antagonist. His primary goal in the film is to harness the powers of the Void so he can cover the meta-universe in darkness and become its all-powerful king.

He appears in the post-credit scene of Super Mario Silver Spurs 3: Endgame, where he is locked up in a multiversal prison with Count Bleck and Mandy as they disagree over whose scheme was the most effective.

In Super Mario Silver Spurs: Dimensional Duos, he and his new allies break out of prison and banish the Multiversal Guardians to a new dimension where all of their skills are truly put to the test. He offers the Eclipse Emerald (a black Chaos Emerald) to Nergal Jr. as a reward for taking down the Guardians, but Nergal Jr. uses him to his advantage and attempts to take control of reality to fulfill his own hopes and dreams. The Guardians succeeded in stopping him, but their multiverse was obliterated by a mystic force.

In the rebooted universe that Multiversal Silver Spurs takes place in, Mephiles returns and once again attempts to spark an apocalypse, this time by attempting to murder Princess Fusee, one of several Time Princesses who keeps the timeline in place. He is locked into the Chamber of Darkness at the end.

He seems to have been released as of Silver Spurs Omicron: Echoes of Disaster, where it is revealed he is one of the "Continuum Renegades" who survived the apocalypse back in Dimensional Duos, and his reasoning for his scheme in Multiversal Silver Spurs was to restore the old universe to his own liking. He is also revealed to be Infinite's adoptive brother, and the two of them argue quite a lot. In a battle, he paralyzes Mandy (who has turned against him and joined the Spurs as of Multiversal Silver Spurs: Continuum Renegades), and as a result, Old Mario takes off to take him down by himself. Mephiles calls upon the Ruined Dragon to take him down, but they both fail to accomplish this as Mario manages to escape with Cappy, Nergal Jr., and Carrie Krueger.

Mephiles is playable in Sonic Battle 2, making his first playable appearance. He is the fifth strongest and the fastest Power Character. His special attack is Darkness Laser, which is a nod to the move he used to kill Sonic in Sonic 06.

Mephiles makes his first appearance in Super Speedstar RPG's story in Chapter 10: Darkness Reigns, where he takes on the form of Luigi's shadow due to the darkness infesting inside of Luigi.

Mephiles alongside with Infinite is one of the main antagonist in Project X Zone and he is the leader of the Dark Empire, here is finding the Chaos Emeralds to combine the Phantom Ruby to destroy the world. 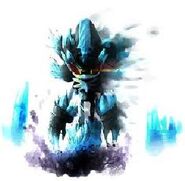 An image of 3D Mephiles. 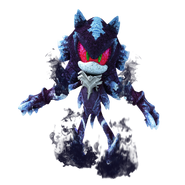 Mephiles the Dark, having taken the form of Luigi's shade. 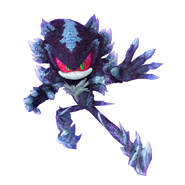