Meowth (Japanese: ニャース Nyarth), one of the "mascots" of the Pokémon franchise, is a Normal-type Pokémon.

It currently has four different forms; most notably, it's currently the only Pokémon with two regional variants. Its regular form evolves into Persian at Level 28. Its Galarian form is Steel type and evolves into Perrserker at the same level, while its Alolan form is Dark type and evolves into Persian via maxing out its Friendship and then leveling it up, except in Let's Go Pikachu/Eevee, where it evolves at Level 28 just like other Meowth variants. Finally, regular Meowth can Gigantamax in Generation 8.

In addition to Pokémon, Meowth has also been seen in the Super Smash Bros. games. Present in every game except Mêlée, it attacks by using Payday, its signature move, to fling coins everywhere.

Meowth is a small, feline Pokémon with cream-colored fur that turns brown at the tips of its hind paws and tail. Its ovoid head features four prominent whiskers, wide eyes with slit pupils, two pointed teeth in the upper jaw, and a gold oval coin embedded in its forehead. Its ears are black with brown interiors, and are flanked with an additional pair of long whiskers. Meowth is a quadruped with the ability to walk on its hind legs; while the games always depict Meowth on two legs, the anime states that Meowth normally walks on all fours. It can freely manipulate its claws, retracting them when it wants to move silently. The tip of its tail curls tightly.

Meowth is attracted to round and shiny objects, and has the unique ability to produce coins using Pay Day. It is known to wander about city streets and pick up anything that that sparkles, including loose change. Upon finding a sparkling object, its eyes will glitter and the coin on its forehead will shine brightly. Meowth is a playful Pokémon with the capacity for human-like intelligence, with at least one member of the species teaching itself how to speak. Meowth tends to live in urban areas.

Meowth was introduced to Alola as a gift to royalty. The luxurious royal lifestyle soon led to Meowth diverging from its origins and becoming the selfish, prideful, and cunning Alolan Meowth. Alolan Meowth will turn hysterical if its coin or pride are besmirched. When the monarchy fell, the rare Alolan Meowth went feral and eventually grew as common in Alola as anywhere else. Alolan Meowth's fur is a light blue-gray color. Instead of brown markings, the tip of its tail, whiskers, digits, and the insides of its ears a whitish-gray. Alolan Meowth's whiskers have a slight curve compared to regular Meowth's straighter whiskers, and it has silvery eyes.

The Galarian version of Meowth is considerably more feral. It resembles a giant fuzzball, and has horns on its head protecting its quite rusty coin.

Junichi Masuda has stated that Meowth is based on Satoshi Tajiri's own pet cat. Meowth seems to be based upon the Japanese legend of the 招き猫 Maneki Neko, also known as the lucky cat or beckoning cat. According to one legend, a cat raised its paw to welcome a lord and saved his life when a lightning bolt hit the spot where he had been standing. Maneki Neko are often used as charms in restaurants and shops to bring customers or fortune and good luck. Statues of the cat are usually depicted holding a koban, an ancient coin used in Japan, like the one on Meowth's head.

Meowth may be a combination of meow (the sound a cat makes) and mouth. The -th may also be borrowed from Nyarth, as both meow and nyā are onomatopoeia of a cat's cry.

Nyarth may be a combination of ニャー nyā (the sound a cat makes) and the switched sounds of シャム Shamu (Siam, former name of Thailand), becoming ミャス Myasu. Siam relates to a cat breed, the Siamese, which in turn relates to Meowth's evolution, Persian, and the Persian cat breed. 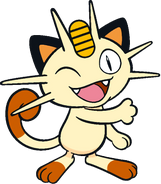 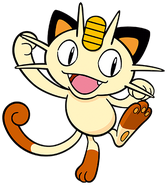 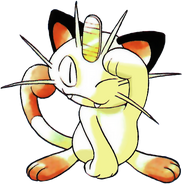 Ken Sugimori's original artwork for Meowth, for the Generation 1 games. 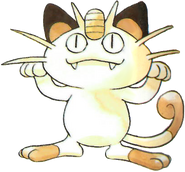 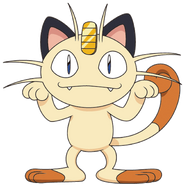 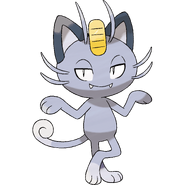