Meloetta, (Japanese: メロエッタ Meloetta) is a dual-type Normal/Psychic Mythical Pokémon. Wwhile it is not known to evolve into or from any Pokémon, it has a second Forme activated by using the move Relic Song in battle. Its original Forme, Aria Forme, will then become the Normal/Fighting-type Pirouette Forme.

Meloetta seems to be a femininely anthropomorphic figure with musical bar-style streaks in its hair, quarter notes (crotchets) (♩) for its arms and hands, and pupil-less eyes resembling whole notes (semibreves). It has a jewel on its forehead and a black headpiece that seems to be shaped like a treble clef which doubles as an attached microphone such as one often used by singers. Its ovular head seems to be ⅓ its body's height and about half its height in width. In its Aria Forme, it has light blue eyes and flowing, wavy hair with light-blue ovals that resemble whole notes. In its Pirouette Forme, it has auburn hair that seems to be stylized in a high bun and red eyes. In either Forme, its midriff and eyes match its hair. It is a genderless species.

According to artists in Unova, Meloetta's beautiful music and dance inspired many works of art, music, and songs. This made the Pokémon popular among both musicians and dancers.

Meloetta once played a song and danced so lightly, it filled people's hearts with joy. However, when sorrow darkened the world, Meloetta lost the melody. At the same time, its red shoes were lost somewhere.

Upon entering the cafe in Castelia City, a guitarist, who knows of the story, remembers Meloetta's melody. Upon playing it, Meloetta remembers the song that it had danced to.

Aria Forme Meloetta resembles a typical singer, with its black hairpiece acting as a headset microphone. Pirouette Forme Meloetta takes more reference to a ballerina, with its hair curled up like a bun and its thighs taking resemblance to a tutu.

Meloetta's hair in both formes take resemblance to a musical staff, and its hairpiece resembles a treble clef. Its arms are basic quarter notes.

Meloetta is a combination of melody, pirouette and the feminine suffix -etta, meaning "little" in Italian. 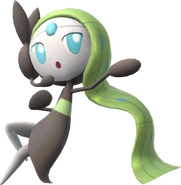 Meloetta's trophy from Super Smash Bros. for Wii U & 3DS 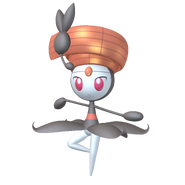 Meloetta's Pirouette Forme, as it appears in Pokédex 3D Pro 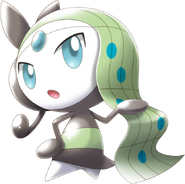 Meloetta's Pokémon Rumble U artwork
Add a photo to this gallery
Retrieved from "https://fantendo.fandom.com/wiki/Meloetta?oldid=3201725"
Community content is available under CC-BY-SA unless otherwise noted.