MB, nicknamed Melissa Bergman (Japanese: メリッサ バーグマン Merissa Bāguman), was the main antagonist of Metroid: Other M. MB is an android created to replicate Mother Brain's mannerisms and control Metroids for experimentation purposes. During the first part of Other M, MB went by the name of Melissa Bergman, and acted as the daughter of the woman who oversaw her creation (and malfunction): Madeline Bergman.

At first, MB was shown to be kind and caring. Despite being an android created to control Metroids, she developed a maternal relationship with Madeline Bergman. Madeline began calling MB Melissa, as though she were her daughter. Madeline also gave MB a hairclip, which seems to have some suppressing effect upon her abilities. However, as MB communicated with the Metroids, she began to evolve and develop emotions, similar to the growth of Mother Brain's personality. The turning point for MB was when Madeline failed to help her as she was forcibly taken to have her A.I reprogrammed, causing a "disturbing reaction in her", which caused her to revolt and take control of the station and its specimens for her own purposes.

Like Mother Brain, she is shown to have a nascent sense of herself, believing that humans were foolish and should be judged for their evil actions. She also has Mother Brain's quick temper. When blinded with anger, she lets go of all reason and focuses solely on venting said anger, seen once where she attacks the guards restraining her in a fit of rage, and again when she summons the BOTTLE SHIP's most dangerous creatures to attack the scientists, and later the Federation Marines. Madeline also said that MB's hatred was entirely focused on herself and Samus after the Queen Metroid was destroyed.

Being an android, MB has a high degree of intelligence. She is noted by Madeline as a quick learner with unwavering confidence. She is also shown to be extremely cunning. A prominent example is when she re-encounters Samus and tells her everything about the Metroid project while purposely leaving out the crucial fact that the Metroids cannot be frozen. This is because Samus posed a major threat to her schemes, and had Adam not stopped her, she would have most likely rushed into Sector Zero unprepared and killed by the Metroids. She also has some sadistic tendencies, as seen by the amused look on her face as she watched the bioweapons slaughter the scientists, even laughing as they were killed. 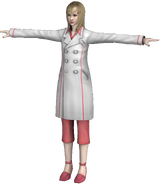 Metroid Genesis
Add a photo to this gallery

Retrieved from "https://fantendo.fandom.com/wiki/Melissa_Bergman?oldid=3204317"
Community content is available under CC-BY-SA unless otherwise noted.