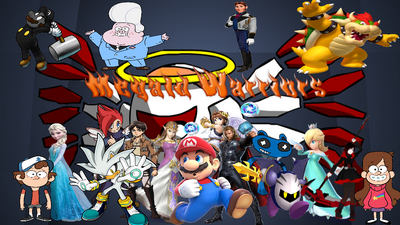 Megald Warriors is a new Umbrella fighting game created by Eternity Enterprises and first in the Megald Warriors series. The game's main theme is The Phoenix by Fall Out Boy.

There are five gamemodes: Battle, Minigames, Event, City Life, and The Dark Domination.

Battle is the standard battle mode of the game! It uses a new point system, where the players need to earn a certain amount of points to win the battle. Points can be earned by dealing a certain amount of damage or pulling off combos. However, you can change the settings to a standard time or stock battle in the options menu.

The Dark Domination is the story mode. It focuses more on platforming and involvs Dark Matter trying to take control of Megald, a shared universe where all the worlds from different series reside.

Event mode is the same as from Brawl, a series of missions you need to complete. After the final mission, you face The Elf King.

City Life is sort of based on Animal Crossing in gameplay, as the characters use their abilities across Megapolis (the sort of hub area in the world of Megald) for normal tasks, such as Mario using FLUDD as a firefighting device.

Minigames is pretty self explanitory. You and a few friends compete in a series of minigames, similar to the multiplayer mode from Sonic and the Secret Rings.

The story mode of the game, Dark Matter is planning to take full control over Megald, and it's up to the heroes to stop him!

You can find it here.

Some characters switch out and share the same slot. They are marked with blue text.

All of the bosses are bosses you face in Story Mode, with the exception of the Elf King.

Retrieved from "https://fantendo.fandom.com/wiki/Megald_Warriors?oldid=2832985"
Community content is available under CC-BY-SA unless otherwise noted.