Mega Mario is one of Mario's Power-Ups. Mario can access this form by eating a Mega Mushroom.

Mega Mario is so huge, that he can crush anything (besides ground & walls) in his path. This includes brick blocks, warp pipes and enemies. It is both handy and unhandy in his own ways. A special meter is also part of this, getting one segment full means that Mario gets one 1-Up Mushroom when the effect lasted. This gauge has at least five segments. This special meter with segments is sometimes replaced by another meter with one segment. A number is added when the gauge gets full, and then it re-empties itself. getting the gauge again full, and the added number changes in the following, and so on. When the effect lasts, Mario gets 1-Up Mushrooms times the number shown.

Mega Mario appears in his castle as the final boss. His battle takes place on a bridge with a switch on the other side. If the Koopa presses the switch, Mega Mario will fall to his doom, and Miss P will thank them with a kiss.

In New Super Koopa Bros. Wii, Mega Mario is seen in Mega Mario's Warped Castle. He fights in the cold depths of space in his Hero Car. Bullet Bills can be shot at him to deal damage to him. After 20 hits, Mega Mario, still in is Mario Car, will get sucked into a purple dog with a yellow mouth and eyes, which turns out to be Sonic the Hedgehog using the Purple Frenzy from the Purple Wisp to eat Mario and the Hero Car. Miss P appears in the Koopa Troop's possession in the final cutscene and the credits.

Mega Mario returns as the boss of World 8 in New Super Koopa Bros. Gold. He attacks by trying to flatten the Koopas, but shells can be thrown at him to defeat him. In the end credits, Mega Mario is seen escaping in his Mario Car, but his massive size causes it to flip over, drop Mega Mario to the ground, and fly off.

Mega Mario appears once again in Mario's Airship in New Super Koopa Bros. U, where he can be defeated by tricking him into smashing the floor. By doing this, Mario will fall down to his castle and will badly damage his airship, causing the damaged airship to crash in front of Mario's Castle. 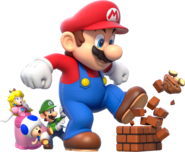 New Super Koopa Bros.
Add a photo to this gallery
Retrieved from "https://fantendo.fandom.com/wiki/Mega_Mario?oldid=2495915"
Community content is available under CC-BY-SA unless otherwise noted.