Megaman Wii is the tentive title for a upcoming game for the Wii in the Mega Man Series. The game will be the last title in the original series and will lead into the Mega Man X series. The only new confirmed Robot Master is Blade Man, though it is confirmed old Robot Masters will return as well as new ones, such as Ground Man. 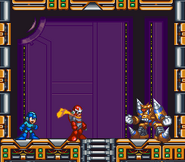 Add a photo to this gallery
Retrieved from "https://fantendo.fandom.com/wiki/Mega_Man_Wii?oldid=1964006"
Community content is available under CC-BY-SA unless otherwise noted.