McBomb (although his real name is Meggabom[1]) is a green Bob-omb that is friends with McBoo. He stars in the McComics, a series of comics, involving McBoo and McBomb.

McBomb is a fun loving Bob-omb who enjoys playing video games. His favorite character is Luigi and wanted to be just like him. He had every Nintendo system ever made, as well as every Nintendo game that involves Luigi. He even made his own Luigi-style hat! He works at a Bob-omb Factory, he takes his work very seriously, so, if you insult his work, be prepared for him to blow up in your face.

* - This means this attack can be used outside of battle (as well as in) to help McBoo solve certain things. 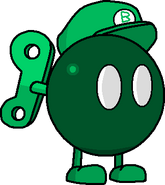 McBoo's Mansion 3
Add a photo to this gallery

Retrieved from "https://fantendo.fandom.com/wiki/McBomb?oldid=394616"
Community content is available under CC-BY-SA unless otherwise noted.