Master Hand is one of the more mysterious entities of the Super Smash Bros. franchise, appearing in each game at the end of their own single-player modes. Master Hand takes on the appearence of a floating, white glove, resembling that of Mario himself, using many hand-based attacks in an attempt to harm the player.

During the events of Melee, Master Hand was revealed to have a "twin", the left handed Crazy Hand, who features slightly more sporadic attacks as his name would imply.

In Super Smash Bros. 4, Master Hand turns into an odd entity known as Master Core when he gets enough damage and difficulty 5.1 and over. It starts out as a mass of darkness with multiple forms, until the last one, which is a Smash-Ball like orb.

Master Hand's mysterious nature has led many fans to try and figure out exactly what he represents; the strongest theory involves a cutscene from the first game implying that he is in fact the hands of someone who brings the characters to life.

Master Hand appears in Super Smash Bros. Assemble as a boss and a major character in the story mode Secret Universe. In Secret Universe it is revealed he is the manager for the Super Smash Bros and selects the characters for each installment. The villain Umbra seems to be heavily connected to him, but it is unknown exactly what their relationship is at the time of writing.

Master Hand appears in the gritty remake of the original Glover, also known as just "GloveRemake", as one of the game's two primary antagonists alongside his brother, Crazy Hand.

The two siblings seek to create a Hands-Only empire "free from the tyranny of arms" known as The Phalangy. The two control a large army of hand-based monsters and other foes, but are rivaled by a small rebellion who understand the necessity of "arms and other body parts", consisting of Glover, It and DanHand, known as The Fist. The masterminds of this new empire have entrapped all other entities possessing more than "just a hand and perhaps an arm if absolutely necessary" within the prison realm known as Limbo (Get it? Limb-O?? ...ah, forget it).

In this story it is revealed that Master Hand is in fact the grown up cursor from Mario Paint, after having been separated from his parent body, that of Hamilton G. Fantomos, the state college professor who would eventually become known as The Phantom Limb. It also reveals that he was formerly in league with other anatomy-based villains such as Mother Brain and Bigfoot, though at the time of the game he has seemingly betrayed these individuals to focus upon his own goals. Master Hand, alongside his brother holes up in the Phalangy's headquarters, the Manipulum, from which they control the Phalangy's machinations.

Like his brother, he has a multitude of attacks he will use, all taken from the Super Smash Bros. series. In battle he will utilize his Jet, Ram, Crush, Lasers, Gun, Grab, Poke, Punch, Slap, Drill, Sweep and Walk techniques. While both hands are still conscious he will also do cooperative moves with his brother. These three extra moves are Applaud, Double Punch and Catch. These three moves will be abandoned should one of the two brothers fall in battle. 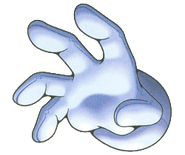 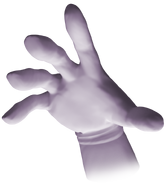 Add a photo to this gallery
Retrieved from "https://fantendo.fandom.com/wiki/Master_Hand?oldid=3262135"
Community content is available under CC-BY-SA unless otherwise noted.