The Master is a game console made by Cento. It is notable for the first Backy game in 1985.

The Master was an success in Japan, and the USA. Meanwhile, the Master Classic was made to revive the Master by Cento themself.

To add a game, add the category "Master Games"

The "iShop" was an Master feature that would let gamers get some Cento games (and even sometimes with permission to SEGA or Nintendo, they also make Cento games) for free. Notably, you could trial (the option for new users which gives a free trial) or buy it, meaning it's free without the limits nor a trial.

During July 2014, the iShop had rereleased the on the UnPhone. It had a more eShop-ish interface. 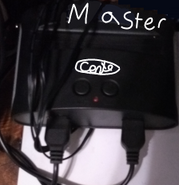 Boxart template
Add a photo to this gallery
Retrieved from "https://fantendo.fandom.com/wiki/Master?oldid=2894933"
Community content is available under CC-BY-SA unless otherwise noted.