Fantendo - Game Ideas & More
Register
Don't have an account?
Sign In
Advertisement
in: Free to use Characters, What is the New Fantendoverse?, Characters,
and 10 more

Mary Azkaban is a African-American cop that lives in Seattle, Washington, aided by her Standing Ripple known as Digitalism. She gained her Standing Ripple through unique circumstances, having found a shattered bit of Ripplite from a scene of crime and during investigation of the material, accidentally gave herself a Standing Ripple. She is responsible for most of F.A.N.T's knowledge of Standing Ripples prior to them meeting Sabrine Lee. The character was created by Helena Harper (t∣b∣c) for two express purposes: to showcase a modern police force member in the superhuman capital that Seattle has become and to act as a secondary antagonist to Sabrine Lee and allies.

Mary Azkaban is a woman from the Seattle Police Force who works alongside F.A.N.T on matters related to Standing Ripples, a growing epidemic across the area due to the Ocean 11 gang and the growing unrest of a society that is split between normalcy and superhumanity. Her Standing Ripple, Digitalism, is a colony-type Standing Ripple that can be strung together or sent as a group. Their unique properties allow Mary to "program" new abilities for them and then execute them as shouted commands.

Mary Azkaban is a African-American woman with black hair and blue eyes, which are highlighted with blue eyeliner. She can usually be seen in her uniform, which is an updated police uniform issued by the Snaily Joe administration. It has a high collar, which conceal two body cameras to the left and right of her that film her when she is on duty. They are tightly sealed into the collar and are impossible to pick out without destroying the gel seal that will activate upon major tampering. The outfit also includes double banded gold cuffs and a police hat. On her chest, she wears the badge and a medal of honor awarded to her for her work with F.A.N.T. She wears gray pants and boots.

Digitalism is a collective of up to 10 small, thin metallic creatures that hold a colored gem in their "heads". They can bend and twist their bodies in many unnatural ways and can snap back to their original position with no harm done. Their bodies have a golden/bronze color.

Far from a rebel, Mary Azkaban is a strict law-enforcing authority that wants to crack down on crime on the out-of-control population that has gained access to Standing Ripples. She has a dominating presence and is well respected by her peers- she does not take abuse and can fight for hours with her words and even longer with her powers and physical attacks. She is completely sober and has not drank any alcoholic substances across her entire lifespan, seeing such things as nothing but distractions.

She is the ideal cop- she does not pull out her gun in most situations, only relying on it for heightened situations where it is absolutely necessary to stop someone else from either attacking her or to hold a gunman at a stalemate. Even rarer is the situation where she finds it necessary to fire- never at the chest or brain, but always at a hand or leg to destabilize her opponent. She tries to deescalate the situation when possible and while can be intense to be around, she thinks out her moves carefully.

Mary Azkaban also has a strict allegiance to her position. She does not feel like she would be better off working for F.A.N.T directly, as this would require her to work on a less local level and not the community she would continue to rather protect more directly. However, she does work in tandem with F.A.N.T and the CIA in cases requiring their attention. However, she will not and cannot follow orders blindly.

Her Standing Ripple, Digitalism, is a collective of small beings. They often pose and dance around Mary Akzaban when active unless given orders, showing that they are willing to serve her given the opportunity. As such, they act almost like her own personal squadron.

Mary Akzaban's powers and abilities come mostly from her Standing Ripple, Digitalism. Digitalism allows Mary to do a variety of tasks with up to 10 of them and can even use them as almost a real-life coding system. They conduct energy through their arms and limbs that allows Mary to bark commands that she has created herself through experimenting with the Standing Ripple to perform different abilities.

On their own, Digitalism is able to operate as spies and record visual information and then broadcast it as holograms for Mary, who can use the holograms to get a real sense of the spatial surroundings and examine evidence from all angles without having to go to the crime scene herself. When two are together, they can swap information by bonking their heads together. Additionally on their own, Digitalism can spark out electricity and channel it through their limbs. When more of them are combined, they can create a power station or serve as a database for Mary with their collective information.

Despite their wealth of abilities and general well-suited nature to the user, they are almost always constantly interacting with the environment. This is their biggest weakness, as they lack intangible states a good lot of the time.

Mary has own combat skills as well, being able to use both a baton and a gun, although she does not use the gun unless she feels it is absolutely necessary- which is incredibly rare. Mary is also a trained runner and has some general advanced movement that allows her to easily catch up with most criminals, even superhuman ones. 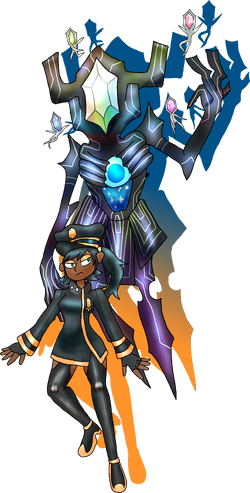 Hyper Form Mary Azkaban and Digitalism (The Ism) (The Ism for short) was the full name of Mary and Digitalism's Hyper Mode forms. While it has yet to appear in canon currently, it works completely similar to the Hyper forms of Sabrine Lee and Juliani Crimsoze- as opposed to giving the Standing Ripple user Hyper Mode enhancements directly, it effects the Standing Ripple instead. Digitalism's powers are replaced with new abilities.

Digitalism's first new power is known as Spektrum. As opposed to having just 10 Digitalisms to work with, Mary gets to work with a staggering 255. These come from a main body, which is known as The Ism. The more Digitalisms Mary pulls from, the less power The Ism has. They are smaller and have a steel color to their bodies. They are roughly 25.5 times smaller in size to the original Digitalisms. Each Spektrum-produced Digitalism has the capacity to capture up to 255 JPEG images in their "hard drives" aka their crystals. While they can no longer produce holographic scans, they are able to capture photographic evidence as cameras incredibly fast and incredibly densely. Mary can collect them back into The Ism and browse their memories and transfer it over networks via a command known as Olympia.

Digitalism's second new power is known as Raum. The Ism is able to become completely flat provided all Digitalisms are inside it, able to contort around as a giant flat piece of black rainbow colored technology. It's surprisingly sneaky, able to wrap itself perfectly around objects and tilt and move them towards Mary Azkaban. It can also split itself up into smaller pieces. It can also transform itself into a room via transforming itself into a box around the person it wants to trap, acting as a prison via the command Jupiter Room.

Digitalism can still be commanded by Mary Azkaban like before, although when fully collected as The Ism (with Spektrum not active), it is able to communicate in a much fuller capacity, able to talk to Mary like a police partner. Mary undegoes a small personality trait that's always been part of her, but in much more full force- she hates cops and working directly with the government. She is much more willing to work with people she otherwise wouldn't work with if it means exposing corruption. This includes law-breakers like Sabrine Lee and even W.R.A.I.T.H., the organization dedicated to fighting F.A.N.T and other political enforcers.

Mary gains a new outfit to reflect her values in this form- any police badge or honors are gone, as she is solely working for herself as a vigilante, uncompromised by the system. It is entirely black and gold, with a Digitalism crystal on her cap and uniform. Her hair also gets slightly longer. Her baton becomes gold colored and features a multi-colored ring of LED light. Digitalism becomes huge, becoming a massive collective system known as The Ism which is black and features lines across it that glow like a rainbow. It's primary color of it's crystal also becomes a rainbow. It's Hyper Mode Orb is collected in it's chest in a rib-like extrusion, not unlike Alien Ant Farm. Around it is small steel Digitalisms that can float around it due to it's electromagnetic properties.