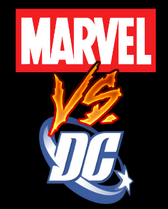 The Battle Of The Century

Marvel vs. DC: Secret Tournament is a fighting game developed by The Gold Division/Geek Inc. and was released on Xbox 1, PS4, Nintendo Switch, and Steam on ??/??/??.

In the Marvel universe, The Grandmaster is getting bored of his own Universes heroes and villains fighting each other, and so decides to find another universe. He decides to use the DC Universe he's heard a little bit about, then plucks 5 other heroes from other universe in too. With that, he sets up a "Secret Tournament" in which the winner gets whatever they wish for. With that goal in mind, the Tournament begins.

The game is similar to games like Super Smash Bros, where up to six players are on-screen beating each other up and sending them flying across the stages. However, instead of %'s, the players have a simple Health Bar. If it depleats, you get K.O'ed. Another diffrence from Smash Bros is that every characters has a "Special Trait" that gives them a unique edge in battle. Up to 6 characters can be on-screen at the same time, and all 24 stages will support all of these characters, real life players or CPU's. 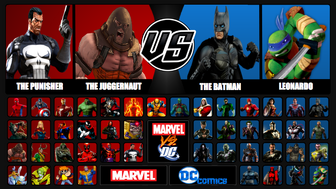 Retrieved from "https://fantendo.fandom.com/wiki/Marvel_vs._DC:_Secret_Tournaments?oldid=2544419"
Community content is available under CC-BY-SA unless otherwise noted.