Marth is a playable veteran character in Super Smash Bros. Calamity. Marth is the main playable hero in the first and third installments of the Fire Emblem series of tactical role-playing games...where permadeath is a thing, and it was primarily well-known in Japan and not in the Western areas, that is until Marth was included in Super Smash Bros. Melee.

Down aerial is similar to its Super Smash Bros. Melee incarnation in this game.

Fully charged Shield Breaker is stronger in terms of knockback. It is noticeable from the freeze frames of the move when it connects.

Dolphin Slash has a sweetspot at the tip of Marth's blade and the slash, which deals moderate knockback. Overall, Dolphin Slash is stronger than its previous incarnations.

Marth can wall jump. Marth's sword attacks have more power when opponents are hit by the tip of it. 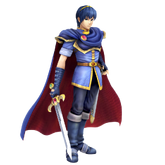 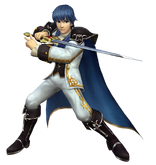 Add a photo to this gallery
Marth has two costumes, one based on his appearance in the first Fire Emblem game for the Famicon or Nintendo Entertainment System internationally, Fire Emblem: Shadow Dragon and the Blade of Light, and one based of Sigurd from Fire Emblem: Genealogy of the Holy War.

Retrieved from "https://fantendo.fandom.com/wiki/Marth_(Calamity)?oldid=2564990"
Community content is available under CC-BY-SA unless otherwise noted.