Start a Wiki
Mario V.S. Donkey Kong: Return to New Donk City is a 2.5D platformer developed with the assistance of Nightcap Devs. for the Nintendo Switch and Nintendo 3DS.

Mario recieves an invitation from Pauline, saying that there's a new festival being held in New Donk City and Mario is invited to it as a special guest. Mario wastes no time making his way to New Donk City.

Once he arrives in front of the town hall, he sees a bunch of New Donkers fleeing from the hall. Mario tries to enter the hall, but is quickly knocked back by an explosive barrel. as Mario gets up, he sees Donkey Kong exiting the town hall with Pauline on his shoulders. Donkey Kong quickly climbs a building and makes a run for it. Mario wastes no time giving chase to the big ape.

The Construction Site starts collapsing and Mario and Paulines start to panick. Suddenly,Donkey Kong wakes up starts beating his chest.He picks them up and places them on his shoulders. The player takes control of donkey kong and starts barging through obstacles in order to escape the collapsing construction site. Once they make arrive at the ground,they look back at the collapsing constructions site. once the site is completely gone,a bunch of New Donkers appear and start cheering for Mario. Donkey Kong sits down and gives Mario a sad look. Pauline explains that he got mad because he wasn't invited to the New Donk City festival. Mario and Pauline look at Donkey Kong before looking at the crowd of New Donkers. They all start cheering before Pauline makes her decision and invites Donkey Kong to the festival. This causes both Donkey Kong and the New Donkers to start cheering

The game is a 2.5D platformer that takes place in New Donk City. Mario has most of his moveset from the original Mario VS Donkey Kong and Donkey Kong '94. He can do the handstand to protect him from overhead projectiles and he can do the handstand jump. He can also do the backflip to reach higher areas, and now he can also perform the Triple Jump, the Ground Pound and the Wall Jump.

In this game, Mario also has 3 health points but he also has 3 lives per level. if mario loses 1 life,he'll respawn at the last checkpoint that was hit. if he loses all 3 of his lives,he'll be booted out of the level and will have to start the level all over again.

If you want a more challenging experience and something a bit more akin to the original Donkey Kong, then the 1 Hit Run is what you're looking for. as the name suggests,In the 1 Hit Run Mario has only 1 HP and 1 life,thus making it easier for him to go down. there aren't any checkpoints in this mode. so if you lose,you'll have to start all over again. in this mode,enemies that can normally be defeated by mario's jump are invincible unless you use a power up.

There are online leaderboards in the game, which allows you to share you score and time with your friends and the rest of the world in order to compete against them and see who can get the highest score. Keep in mind that only the time and scores you've gotten during the 1 hit run will be visible to online players.

Note: most of the enemies are pretty difficult to take out without a power up like the Hammer.

This game takes place in New Donk City, so most of the "worlds" are themed around locations of the city.

The Logo of the game 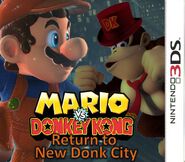 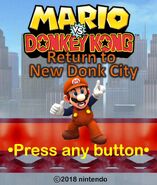 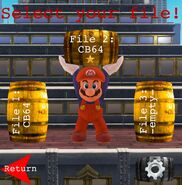 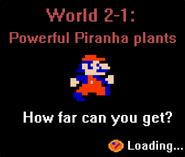 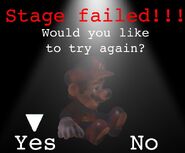 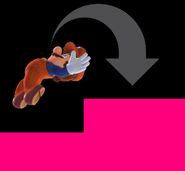 mario spinning on a pole

Mario ducking to dodge a fireball 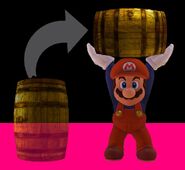 Mario picking up a barrel 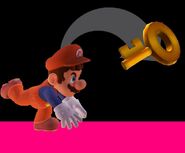 mario tossing a key
Add a photo to this gallery

Retrieved from "https://fantendo.fandom.com/wiki/Mario_vs_Donkey_Kong:_Return_to_New_Donk_City?oldid=3226194"
Community content is available under CC-BY-SA unless otherwise noted.