Mario Superstar Strikers is an upcoming Wii U game and the third installment in the Mario Strikers series. It has a lot of similarities to past installments, especially Mario Strikers Charged, returning Super Abilities as well as Mega Strikes for captains, and Skillshots for the many different sidequicks. The game brings more variety in both character and stage rosters, as well as a few new modes including a Special Games mode. This game kind of maintains the realistic sci-fi tones, but a little bit more of the common bright and whimsical cartoon themes has been implemented as well. The game also supports Nintendo Network connection for online multiplayer, working similarly to Charged's Nintendo Wi-Fi Connection.

Like in past installments, Mario Superstar Strikers is based on street football. A new gameplay addition is that now teams have up to 11 members rather than 5: one being the goalkeeper, one captain and the other nine playing as offensive/defensive sidekicks. The two teams face off against each other to kick the ball into the goal within the time limit, which can be from two to five minutes (three minutes being the default amount). They may also choose to compete to reach a certain amount of goals first. When the time runs out, whoever has the most goals (or the next goal, if sudden death occurs) wins the match. If the score is tied at the end of the set amount, the current music will speed-up and the alarm will sound, signaling sudden death. Like in Charged, characters wear protective gear, and the ball is metallic. Various power-ups and items can also be used in order to take advantage during a match.

As the name implies, this player is the captain, heading the team. The captain is supported by nine offensive and defensive sidekicks and one goalie. The captain always plays an offensive role, and is able to perform a Special Ability on the stadium for a short period of time, and also Mega Strikes at the moment of kicking the ball into the goal. Every captain as an unique ability and Mega Strike, although some share slight similarities.

Defensive ones play behind both offensive sidekicks and the captain, in an attempt to defend the ball from reaching the goalie. There are up to four defensive sidekicks.

Also known as keeper or just goalie, this team member is very important, being the final line of defense. They are permitted to use their hands to block goals, but often are forced to use their bodies to do so.

Items are one of the most critical elements during a match as part of a team's strategy. Any team member is able to use items regardless of which player earned it. Special Ability items, however, can only be activated by the Captain.

The offensive items are often devastating, and very helpful at blocking Mega Strikes, clearing the field or for taking possession of the ball.

The defensive items beef up the user and are particularly useful for scoring goals without the use of Mega Strikes.

This is the standard tournament mode of the game. Players are challenged by various teams across six cups. As the mode progresses, the difficulty increases. Alternatively, players can choose to play in Extreme Mode, which makes the game difficult from the beginning. The mode maintains the tournament ladder system.

Essentially the same as Grudge and Domination Modes from Super Mario Strikers and Mario Strikers Charged, respectively. Two teams are created and the player can then decide in which team they wish to play on. In this mode you are free to choose gimmicks for the match, set the time limit or number of goals needed to win the match, etc.

The online mode of the game. Players with access to the Internet will be able to play with anyone around the world or in their region through the Nintendo Network connection. Players are able to play in Ranked Matches, Friend Matches or Online Tournaments.

Returning from Charged. In this game, the number of challenges doesn't rely on the number of captains and instead a larger amount of challenges is added. In fact, in some challenges, the player is free to choose their desired character. However, opponents are mostly pre-established, although this is also not always the case. Special Challenges can also be played in Special Tournaments by using the Nintendo Network Mode. Some challenges feature Bosses. In all Boss Challenges players are able to choose their characters.

A new game mode that features 8 minigames, 1 for certain new stadiums. Special Games usually differ a lot from actual soccer, having unique tasks for the players. In this mode, captains and sidekicks are all considered regular playable characters, and sidekicks' colors don't depend on teams and instead have a default coloration.

The Strikers Academy is the tutorial mode of the game where the player can learn the game's rules and controls. There is a total of 12 lessons. To take a look at the lessons, see: Mario Superstar Strikers/Strikers Academy.

Players can view their awards and records.

Players can adjust the game's various settings such as the audio, the screen ratio, the controls, etc.

The captains are the ones that head a team, and the only ones capable of performing Special Abilities and Mega Strikes.

Sidekicks are, of course, also an important aspect of any team. Like in the last installment, different types of sidekicks can be chosen for one team.

Goalkeepers, also known as goalies or keepers, are sidekicks that block goals. Unlike past installments, the player is able to change the goalkeeper, instead of being just Kritter. However, the amount of goalkeepers is still very short, with only three and one of them being unlockable.

Like in Mario Strikers Charged, each stadium in this game features unique gimmicks and dangers. The game brings new fields along with some returning ones from the previous two installments.

Unlike the previous installments, this game features six cups rather than three or eight.  Winning each cup results in unlocking the defending champion, the corresponding championship match stadium and the next cup. The Robin-Round style is reused: a win is worth 3 points, a loss is worth 0 points and losing a sudden-death loss is worth 1 point. Teams are still ranked by points at the end of the qualifying rounds, with the top two going to the elimination round being semi-finals and finals. If the player loses here, they must restart the cup. If making it to the defending champion, they must win a 3-game series in the same stadium.

The first three cups. These cups are easy when compared to the Superstar Cups, but the difficulty still increases with each cup. In Extreme Mode, these cups are almost as hard as the first Superstar cups. 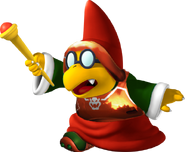 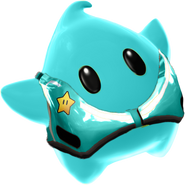 Luma
Add a photo to this gallery

European box art.
Add a photo to this gallery

Retrieved from "https://fantendo.fandom.com/wiki/Mario_Superstar_Strikers?oldid=2375277"
Community content is available under CC-BY-SA unless otherwise noted.