Mario Sports Mix: 3D Variety is an upcoming 3DS game for the Mario Sports Mix series, it is the second installment overall. There are many more characters and stadiums unlike the previous installment. Two new sports were added, Badminton and Football. 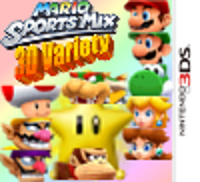 Each character is split into different default teams, they can be played in any team and there are no team captains. Note these are the Dodgeball, Hockey, Football and Basketball teams.

~=Not availible from start

This team is made up of Mario, Noki and Pianta. They have a balance of types so are good on court.

Scaredy Rats team are known to be a good team, but sometimes get scared and run from a match.

Royal Blossoms are known as The Tricksters as there is one Technique type Peach, the skillful one, who makes a perfect combo with the two other speedy players, Toad and Toadette.

Cruising Petals are a skilled team with Power, the team is made up of Daisy, Petey Piranha and Monty Mole.

Eggciting Trio are a team who work really well together, their team is made up of Yoshi, Wiggler and Flutter.

Bow Guys are sort of like Delfino Dudes but have Technique and Tricky instead of Speed and Power.

Money Makers are a mixture of types, Wario the Power House, Jimmy T. with his skill and Mona being a well-rounded player.

Waluigi is Lugi's rival, he decided his team should be like him, crazy and Zany. So it is made up of himself, King Bomb Omb and Dry Bones

One of only two teams named after a character and with a captain! Bowser Bullies are made up of just Power types.

Barrel Bashers are made up of DK, Funky Kong and Donkey Kong Jr. They are a bit like Cruising Petals because there are two Power types but has one Balanced type.

Bowser Jr. Rookies is the other team named by a character. It is made up of Bowser Jr., Hammer Bro. and Magikoopa because Bowser's best minions are these so he gave them to Bowser Jr.

Banana Buddies are a team made up of Diddy Kong, Dixie Kong and Tiny Kong, all being Speedy and known as the Speedsters by others.

Galaxy Group is a team made up of 3 Tricky types . These are Rosalina, Lubba and Honey Queen.

Marchin' Minions are a good team to use, it is made up of Koopa Troopa, Paratroopa and Lakitu. Lakitu and Paratroopa tend to steal the ball get the other team to try and get them they'll then jump in the air and throw to Koopa Troopa who scores.

Baby Boys are the name suggests, are a team made up of babies who are boys.

Royal Family are a team made of Baby Peach, Baby Daisy and Toadsworth.

This team is made up of characters who appeared in the game: Mario RPG: Legend of the Seven Stars!

Krool Damsel are a team made up of King K. Rool, Kritter and Pauline. Pauline joined because she hates DK and went on his rivals side!

Team Square are the characters from the Final Fantasy series.

Not fitting in any other teams, TaBooki formed his own team. His team consists of TaBooki, Moogle, and Cactuar.

The previous teams are the default Dodgeball, Hockey, Football and Basketball teams, here are the following other teams in sports;

Every Character has two alternate colours;

There are three ways to unlock characters, 20 are bought in the Shop, 20 are unlocked by doing certain tasks and the other 5 are accessed by Spot Pass or Street Pass visits.

Coins are earnt by playing matches, 10 coins for one match, in Tournament Mode (Cup Mode) you will get extra coins if coming 1st, 2nd or 3rd.

Retrieved from "https://fantendo.fandom.com/wiki/Mario_Sports_Mix:_3D_Variety?oldid=2359207"
Community content is available under CC-BY-SA unless otherwise noted.