It begins with Wario saying, "Nintendo hee hee hee", and Waluigi saying "EEA Inc. hee hee". Wario is playing the classic NES game, Super Mario Bros. and making Mario have many Game Overs. Waluigi enters the room and flips the channel. Wario who wants to play the game starts to fight Waluigi when they see Peach, Toadsworth, and Rosalina talking on the live on the screen. They stop fighting and watch. Peach is calling all tennis players back to Peach Dome for Peach Dome Tournament 2. Rosalina says that she will take all the invited tennis players in her space ship to Star Galaxy Court for the finals. Wario and Waluigi start out the door when Toadsworth mentions that they are not invited. Wario smashed the TV with him tennis racket. After Mario & Luigi win and make it into the finals they are the last to board Rosalina's Space Ship. When the door closes, Wario & Waluigi come and see that they are to late. So Wario bunches Waluigi into a ball and hits him with him tennis racket. Waluigi turns normal and hangs on and Wario jumps on as well. The rocket going into full speed. Still the two hang on. When the rocket lands, Wario and Waluigi hide and get ready to ambush Mario and Luigi. Just then Bowser comes in him UFO and a black hole forms. Wario and Waluigi get sucked in. just then a meteor comes and Mario hits it. The meteor hits Bowser's UFO and it crashes revealing that the black hole was caused by Bowser. It disappears and Wario and Waluigi fall down into the broken court. The Bucketheads take Wario and Waluigi away and the last match starts with Mario and Luigi playing Bowser and Bowser Jr. When Toadsworth announces that Bowser and Bowser Jr. have won, Mario says, "eh, Mama Mia".

There are four groups of characters, All Around, Technique, Speedy, Tricky, Defense, and Power. You can chose Singles or Doubles. EEA Inc. confirmed there will be 36 playable characters. All the characters from Mario Power Tennis (half) return and will be default characters. The rest will be unlockable. 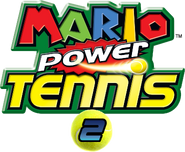 The Logo
Add a photo to this gallery
Retrieved from "https://fantendo.fandom.com/wiki/Mario_Power_Tennis_2?oldid=2938830"
Community content is available under CC-BY-SA unless otherwise noted.