Mario Party Xtreme is a game released by Nintendo for the 3DS & Wii U, and by ACME for the PC & mac. The PC and mac versions are the only open source games in the Mario series thus far. Here's my article. I hope you like it.

There are many items. Here are a few

A movie studio (Mimi Films) is opening. Mario wants to sign a contract, but Bowser steals it. Mimi falls for it and agrees to put Bowser in the movie "Bowser vs. The Wonderous World of Disney." This film gets released in Toadette Theaters, and quickly becomes a success. Toadette, being frustrated that the movie is stealing her other movies' viewers, runs and tells the game roster as loud as she could, "MarioWood is being invaded by Bowser!!!" The gang STILL didn't listen. Finally, Dry Bones from Dry Bones Video tells them, "The superstar that beats Bowser gets the contract." They all agreed. and they set out for adventure. At the end of the game, Bowser is fired, and the player is hired. The aforementioned movie is banned worldwide except in Ukraine. Everyone lives happily ever after. The credits are the same as in Mario Party 1.

Here's the Mariowood boards. The ^ sign indicates a duel board; the * indicates an unlockable board

And Here are the retro boards

Here's all the MarioWood Minigames

All the retro games return

All this game's characters are the characters from previous games and the previously mentioned added characters.

The gameplay is the same as Mario Party 2

All of the new music will be open source. The rest of the music is every soundtrack from previous Mario Party games.

All spaces from previous games return.

The rest is history.

Priness Betty (Used because Mimi Mimikins is in the game too, and nobody wants confusion) 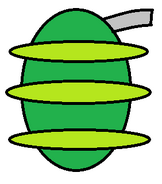 Grenade that gets thrown and explodes to start a battle game

Host of the desert map

Booby-trapped Space
Add a photo to this gallery
Retrieved from "https://fantendo.fandom.com/wiki/Mario_Party_Xtreme?oldid=1710493"
Community content is available under CC-BY-SA unless otherwise noted.