Mario and the whole crew (except for unlockable characters) are celebrating Bowser's latest defeat. While Mario and friends were eating at a picnic, some screams and blasts were heard by them. Wast it Bowser causing troubles again? Yes he was. along with his son Bowser Jr.. Bowser was aiding some airships to attack some kind of monument, The Millenium Star Pillar and spreading its power over the kingdom and stealing most of them. Bowser and Bowser Jr. were alone in front of the pillar when Mario and his friends approached them, being sure that they would defeat them as they were just two, various bad guys that Mario has fought before appeared just in front of him along with the King of the Koopas, this included Goomboss, Petey Piranha, King Boo, General Guy and many more.

Mario and friends were defeated, and Bowser stole and had spread all the Stars over the Mushroom Kingdom within its different areas. When Mario and his friends took a look again, they all vanished. Dissapointed but still not giving up, Mario wanted to go after Bowser and recover all the Stars. A new Toad friend, called Circus T. (the new host in general), had an idea. Mario and friends could solve this by competing in party boards around the areas to recover the Stars and defeat those guys and see who would defeat Bowser and become "The Superstar".

In Mario Party Wii U the classic and original gameplay returns. Players have to go around boards, collect Coins and various other items that can help them or hinder others in their quest to collect Stars. The rules that have to be met in order to get a Star are different in every board (except Goomba Valley and Bowser's Magma Lair).

A new thing are the Balloons. The balloons act just like Orbs and Candies, as well as normal Items. Players can use different Balloons to hinder, or maybe help, foes. Like in Mario Party 7 does with orbs, characters have an own balloon that cannot be obtained by other characters. However, those balloons can only be bought in shops.

Aditionally. the costume system from Mario Party 2 returns in this game, bringing a few ones from said game along with new ones depending on the board they are playing in. Also, the costume system can be turned on or off if the player wishes to play or not with them.

The game will have 21 different playable characters to choose, from which 15 are default and 6 are unlockables. This game also introduces Character Types in the Mario Party series, there are 5 different Character Types that can be used for character's advantages and disadvantages in some minigames. Also, each character has their own color, default partner and emblem. The types are:

The game has a total of 15 new boards, 10 are Normal Boards and 5 Battle Boards.The * denotes the board is unlockable.

Spaces with a * denotes that the player cannot land on it.

Players can obtain a Balloon from a Balloon Shop or a Balloon space on the board. Some are not found on all boards, however. There is a Bonus Star for getting the most Balloons.

Player Balloons are red colored balloons and are used on the player.

Tricky Balloons are green colored balloons that are used before the player moves.

Rush Balloons are yellow colored balloons that are used while the player moves.

Thrown Balloons are thrown on a space. Happenings are executed only if the player lands on it. The thrown balloons' color is orange. These balloons have an effect on a player who lands on the space. If the owner lands on the space, they will receive five coins.

Roadblock Balloons are purple balloons that are thrown. They are triggered when an opposing player passes it.

Character Balloons are blue balloons that only can be used by a specific character. 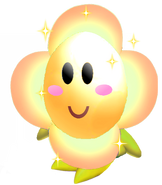 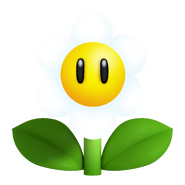 The Flower, Daisy's balloon item.
Add a photo to this gallery

Retrieved from "https://fantendo.fandom.com/wiki/Mario_Party_Wii_U?oldid=3334829"
Community content is available under CC-BY-SA unless otherwise noted.